Recycling Water in the Delaware Basin

Determining a source for water is an essential component of our drilling and completions activities. In the Delaware Basin, produced water reuse has been identified as the best option, economically and environmentally, for full-cycle water management. Produced water is recovered from wells along with natural gas and oil production. In the Delaware Basin, the water-to-oil ratios are between 1:1 and 7:1, so produced water is abundantly available. Given the limited surface and ground water resources in the area and resulting well cost implications, there is both an environmental and an economic incentive to utilize produced water whenever feasible.

In the China Draw area of the Delaware, 2019 was the first year in which we used a centralized water gathering and distribution system. The system transports water from producing wells to a water treatment facility. From there it goes into holding ponds and then on to the next well to be used for hydraulic fracturing. Then the process is repeated. 7.8 million barrels were transported via above ground pipes to the treatment facility. We treated 9 million barrels of water for use in the completions of 20 wells. By piping the majority of our water needs, we were able to remove the equivalent of 52,000 truck round trips from local roads. By treating and then reusing water, we reduced the amount of local water required for hydraulic fracturing by 68% and reduced the amount required for deep-well disposal by 36%. 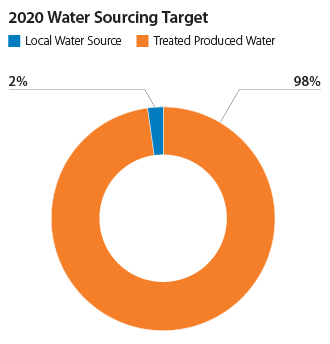 During 2019 there were challenges in keeping up with the water reuse needs due to insufficient water supply from the existing wells and infrastructure. The team had to manage scheduling issues as they worked to get enough water treated in time for the next wells to be fracked. Transportation for treatment of the remaining 1.2 million barrels required trucking. As field production from China Draw grows and infrastructure expands, additional system flexibility will be created to meet the long-term needs of the water reuse program.

The next centralized system is already being developed in the Zia Hills area of the Delaware Basin. Lessons learned from China Draw have been incorporated in the planning and it is expected the facility will begin treating water for use in well completions in the early fall.