ConocoPhillips has been discovering and developing Alaska’s extensive North Slope oil resources since 1965, and the Willow project in the northeast portion of the National Petroleum Reserve-Alaska (NPR-A) is the company’s most recent major development project.

Formerly the Naval Petroleum Reserve, the 22-million-acre NPR-A was created in 1923 to provide a future oil supply for the U.S. Navy. Between 1944 and 1982, the U.S. government drilled a number of exploration wells in NPR-A but did not find commercial quantities of oil. Congress authorized competitive oil and gas leasing in the NPR-A in 1980 and has since held multiple lease sales. In 2013, the Bureau of Land Management (BLM) issued a Record of Decision for an updated Integrated Activity Plan (IAP) for the NPR-A. The Willow development plan is consistent with that IAP.

“ConocoPhillips has held oil and gas leases in the NPR-A since the first lease sale in 1999,” noted Connor Dunn, asset manager for the proposed Willow development. “We have been carefully and responsibly developing our leasehold within the NPR-A. Our first drill site in NPR-A, CD5, began production in 2015.”

The Willow discovery was announced in 2017, and the potential multibillion-dollar development could produce in excess of 100,000 barrels of oil per day, create thousands of construction jobs and hundreds of permanent jobs, and contribute substantial revenue to federal, state and local entities. The proposed project would consist of drill sites, access and infield roads, pipelines, a processing plant and other facilities to support production and transportation of petroleum from federal oil and gas leases in the NPR-A while minimizing impact to the environment and subsistence resources. Read the Willow Fact Sheet.

In May 2018, ConocoPhillips initiated the regulatory permitting process by requesting the BLM prepare an Environmental Impact Study (EIS) for a Willow Master Development Plan. The BLM, with engagement from cooperating agencies and local governments, is currently developing the EIS and plans to release a draft for public review and comment in fall 2019. A final EIS, incorporating revisions based on public review, is anticipated in 2020. After completion of the EIS and additional construction and operational permits and approvals, first oil could flow as soon as the mid-2020s. The regulatory approval process for the Willow project began with preapplication discussions with regulatory agencies, which helped inform the work of the development team in planning Willow as “the Arctic oil field of the future.” Early discussions with regulators were later supplemented with detailed project information and tours of existing oil fields on the North Slope.

“We are supportive of a robust EIS process that clearly complies with all requirements, and as we move forward, we are confident that the project will represent input from a variety of stakeholders,” said Chris Wrobel, the project’s permitting coordinator with ConocoPhillips Alaska.

We are committed to environmentally and socially responsible development, and the planning process integrates engineering; company policies, standards and initiatives; scientific research; and stakeholder engagement. Sustainability-related concerns are integrated into project design early in the process. Prior to developing a new asset like Willow, the company works with regulatory agencies, local communities, and other stakeholders to assess and mitigate potential impacts related to air emissions, surface disturbance, water use, wildlife and people. We also ensure that our infrastructure is designed to be resilient to potential physical impacts of climate change, such as thawing permafrost.

We have a long and successful history of outreach and engagement with North Slope communities going back to the early days of development in the Prudhoe Bay field. Since the Alpine discovery and other recent discoveries in and around the northeast portion of the NPR-A, the company has significantly increased its outreach to the NPR-A communities and in particular the community of Nuiqsut, which is in close proximity to Alpine.

“We consulted with community members, federal resource agencies, state and local governments and Alaska Native entities to gather input about how to minimize the potential impacts of our planned operations while maximizing opportunities for community benefit,” said Lisa Pekich, director of village outreach for ConocoPhillips Alaska. “In 2018, we held over 35 meetings to solicit stakeholder input about the proposed project design.

“As the most experienced operator on the Western North Slope, we have developed working relationships with key stakeholders. We gather input and work with stakeholders to ensure they’re involved and that they have influence in the development process,” Pekich said. “This is especially true for the local village of Nuiqsut, which is about eight miles south of our Alpine field.”

Engagement with local stakeholders occurred in personal conversations, open community forums, job fairs and meetings with the village leadership, the Alaska Eskimo Whaling Commission and Nuiqsut whaling captains. The Willow development team is working to refine the project to address local concerns. Some early examples include developing a gravel source further from the village to reduce potential impacts, consulting with village elders to understand culturally important areas, and supporting job training. Based on community feedback, roads will also include pull-outs, generally located every 2.5 to 3 miles, for parking and tundra access for local residents.

“People living near our operations already use our gravel and seasonal ice roads,” Pekich said. “The additional gravel and ice roads for development of Willow will further help connect the remote communities and allow them greater and safer access to hunting and gathering areas.”

Although the federal government manages the NPR-A, 50% of the revenue received by the federal government from oil and gas leases and production must be paid to the state of Alaska to fund the NPR-A Impact Mitigation Grant program. These “impact funds” are designated for planning, construction, maintenance and operation of essential public facilities, and other necessary provisions of public service. Communities most directly or severely impacted by resource development are given priority for funding.

“We work with the Nuiqsut community to help them access all possible benefits from the impact funds. This included providing a grant writer to help the community identify and plan projects and seek funding,” Pekich noted.

ConocoPhillips actively sponsors scientific research to understand the ecosystems near our operations and identify ways to minimize our impact. We work with federal, state and local regulators, as well as local communities, and many of our sponsored studies appear in peer-reviewed scientific publications. To date, studies related to the Willow development include:

“Annually we employ a local Nuiqsut resident to serve as a community subsistence representative,” said Robyn McGhee, environmental studies coordinator for ConocoPhillips Alaska. ”That traditional and local knowledge provides invaluable, ongoing insight into how the community uses the land and how we can best respect the rich culture of Alaska Native people.”

The Willow project will be among the first on the North Slope designed and built to meet the U.S. Environmental Protection Agency’s new requirements to reduce volatile organic compounds and methane emissions. Additional voluntary design considerations with environmental benefits include efficient turbines that emit less carbon dioxide and methane than alternative equipment, combustion technology that reduces criteria pollutants, and connecting our drilling rigs to ConocoPhillips’ natural gas-powered electric grid to reduce air emissions from diesel combustion.

Designing Willow to minimize our footprint 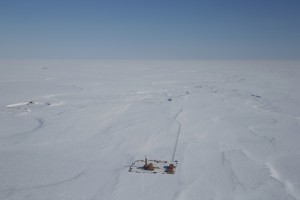 The Willow development’s proposed locations for infrastructure and well pads are designed to maximize recoverable subsurface resources while minimizing the surface footprint. Our proposed infrastructure pads consist of the Willow Central Facility (WCF) for processing equipment and a separate pad for a camp to support operations. The camp would include living quarters, offices, dining facilities, a medical clinic, wellness and camp maintenance facilities, a lab, an emergency response center and water management and treatment plants.
Proposed road routes to the Willow development were selected to:

The planned gravel roads connect Willow drill sites with the WCF and connect the WCF to existing Alpine infrastructure. Wherever possible, roads will be constructed 500-1000 feet from pipelines. Enough to allow visual inspections of the pipelines from the road, but far enough to facilitate caribou movement and to prevent excessive snow accumulation from snowdrifts on the roads. As we have done with other nearby developments, we also build our pipelines at least seven feet off the ground to allow for caribou movement and we design pull-outs and ramps from roads to aid residents with access to subsistence hunting.

Through use of new technology, we have been able to reduce the size of well pads since we first started exploring for oil and gas on Alaska’s North Slope. 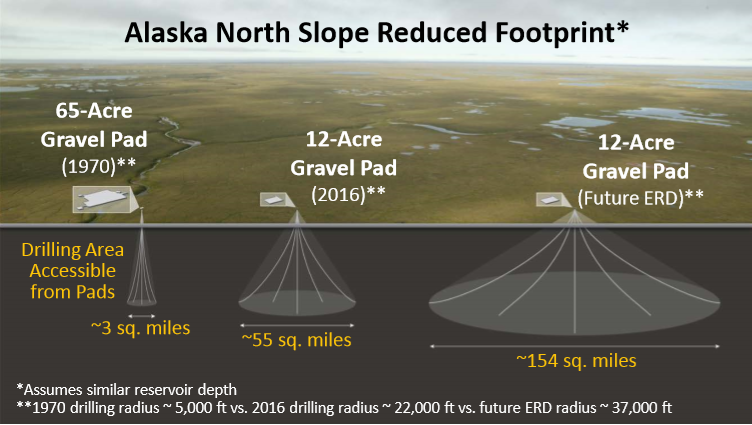