We measure and report on the volume of freshwater and non-fresh water withdrawn from local water sources and the volume of produced water that is reused, recycled, disposed or discharged after treatment. This data is used to estimate our water intensity and exposure to water stress. We also collect water forecast data for our annual Long-Range Plan process which enables us to test our portfolio of projects against our water risks to make better-informed strategic decisions.

About 90% of the water we use as source water for our operations is non-fresh groundwater, seawater and reused/recycled produced water.

In 2019, our operated assets withdrew 14.4 million cubic meters of freshwater1, a decrease of 21%. This was primarily due to reduced freshwater use for hydraulic fracturing in our Eagle Ford and Bakken operations, partially offset by increased fresh water needs as our Montney operations ramped up.

Our 2019 non-freshwater2 withdrawal volume was 51.3 million cubic meters, an increase of 4%. This increase was mostly due to increased non-freshwater use for hydraulic fracturing in our Eagle Ford operations and for Alaska operations, partly offset by reductions in seawater use in Norway. 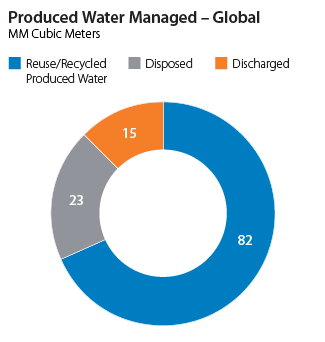 Of the produced3 water recovered in 2019, 70% was reused or recycled, 18% was disposed and 12% was treated and discharged offshore.

We recycled or reused 82.3 million cubic meters of produced water in 2019, an increase of 4%. This increase was mostly due to increased produced water reuse for EOR and recycling for hydraulic fracturing in our Permian assets, partly offset by a reduction at Surmont due to a turnaround.

* All data in units of million cubic meters. 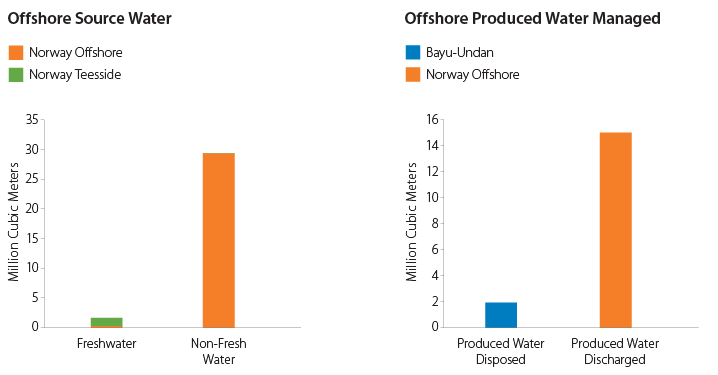 We use the World Resources Institute Aqueduct Risk Atlas (Aqueduct tool) to assess our portfolio exposure to water stress. The Aqueduct tool, also used by the Sustainable Accounting Standards Board (SASB), measures the ratio of total water withdrawals to available renewable surface and groundwater supplies. Our Anadarko, Lost Cabin Gas Plant, Niobrara, Permian Basin Central Platform and Alaska Kuparuk assets are located in basins with high or extremely high baseline water stress and accounted for 8.4% of our total freshwater withdrawal in 2019.

1 Regulatory definitions of freshwater can range from less than 1,000 to less than 4,000 milligrams per liter total dissolved solids (TDS).

4 The sale of Niobrara assets was completed in 2020.