Water sourcing and produced water management are global challenges that require local solutions. Water risks identified for our operated assets and projects are managed at the BU level, enabling a tailored region-specific approach. The corporate SD team supports the risk management process by tracking business risks across the company, developing and tracking metrics for annual reporting and forecast data for the Long-Range Plan, and providing oversight and support to the businesses.

Produced water from our onshore operations is treated and recycled to hydraulically fracture wells and generate SAGD steam, reused untreated for EOR, or disposed by well injection. We also manage waste water at our terminals, for LNG production and domestic waste water for staff accommodations at remote assets.

Hydraulic fracturing, or fracking, is essential to produce oil and natural gas that is otherwise trapped in low-permeability rock formations. This unconventional well completions technique includes pumping water and sand into the formation to create narrow fractures through which oil and natural gas can flow. While some water is required during drilling, the majority is used for fracking. Some wells can produce more water than natural gas or oil, and the relative volumes vary significantly with basin geology/hydrogeology. Similarly, produced water quality varies between and even within basins. In 2019, our unconventional assets included Eagle Ford, Delaware and Bakken in the U.S. and Montney in Canada.

The volume of water used, as well as overall water intensity, has increased over the last years as more unconventional wells have been completed and techniques have advanced. The techniques and technologies used to hydraulically fracture horizontal wells have evolved into an increasingly complex and large-scale process. Our completions teams have maximized production and reduced costs by using advanced data analytics and innovative technologies such as distributed acoustic sensing to monitor the efficiency and distribution of fractures. This has allowed optimization of key parameters including:

These design changes have not only improved the economics but have also helped to increase the average overall production (estimated ultimate recovery – EUR) of wells across our unconventional asset portfolio.

While each region has a unique set of optimum parameters determined by subsurface conditions and geology, several general trends are consistent: 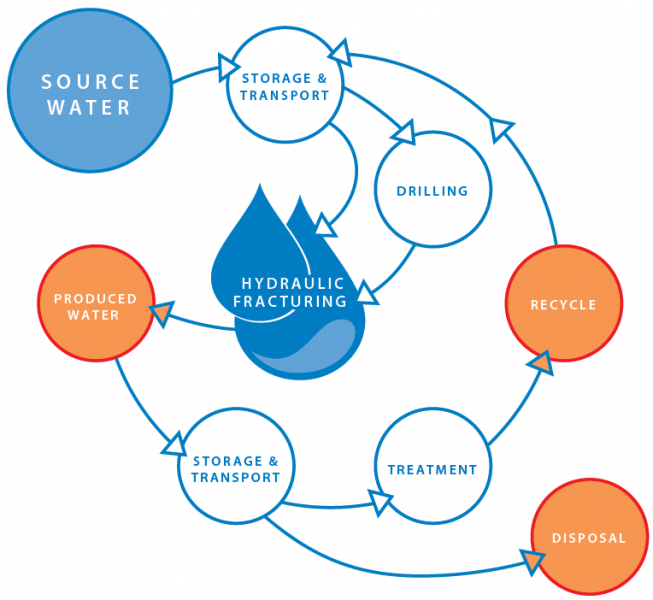 Produced water recycling has been identified as the best option to hydraulically fracture our Delaware and Montney assets. This has both economic and environmental benefits for full-cycle water management, as the use of treated produced water reduces the amount of water withdrawn from local sources, the amount of produced water injected for disposal and truck traffic used to transport the water.

In Montney, we completed water sourcing agreements with the Halfway River First Nation, secured a 20-year term water license and completed the installation of the centralized water gathering and distribution system in 2019. In the water hub, produced water is treated for recycling and stored in engineered ponds. We have a target to recycle at least 80% of the produced water for fracking, with the remaining amount sourced from a local river. Learn more about our Montney water management.

In the Eagle Ford, we target groundwater sources that are not in proximity to other users such as municipal, domestic or agricultural. Our 3-D water visualization tool provides a 3-D image of aquifers, water wells and natural gas and oil wells. We use the tool to demonstrate that we target deeper water sources that are not used by local landowners. The majority of source water is transported using temporary, lay-flat pipelines from central storage ponds, rather than trucks. In 2019, Eagle Ford began using a pipeline-based produced water central gathering and disposal  system for facilities in DeWitt County. That system will be expanded, and a similar central gathering and disposal system is expected to be completed for facilities in Karnes County in 2020. Both initiatives have removed truck traffic from local roads.

In 2019, we continued to work with the state of Texas and peer companies to support funding to deploy and manage seismic monitoring equipment which can help provide proactive responses to address earthquake-related risks. TexNet is a system of earthquake sensors placed in the ground at dozens of locations across the state of Texas, coupled with a dynamic mapping tool that offers information on the detection location, timing, depth and magnitude of recorded earthquakes. By analyzing data from the monitoring network and placing it into a geologic context, TexNet provides an independent, comprehensive investigative approach to help monitor earthquakes. Access to data from this network greatly improves our knowledge about earthquake risks and assists operational decision-making. The TexNet data is publicly available and widely used by academics.

Water management for our Alaska operations is unique, as most of our freshwater use is not directly for natural gas and oil production, but primarily to build seasonal ice roads and pads for exploration and overland resupply. The water is sourced locally from surface water bodies in accordance with regulatory permits and returned to the environment every spring as meltwater. To produce natural gas and oil, our Alaska assets rely on non-freshwater, specifically seawater, and reused produced water for EOR.

For our conventional assets in the Permian Basin, the water management focus is on reusing produced water for EOR. In 2019 we also conducted a pilot project to use evaporative technology to reduce the volume of produced water for disposal. This forced evaporation technology, also called thermal desalination, uses natural gas to heat produced water. The process releases water vapor to the atmosphere while concentrating the residual produced water. It can significantly reduce produced water volume, reducing disposal requirements.

In Indonesia, we use freshwater from groundwater and surface water sources for operations. Recovered produced water is injected back into the formation via dedicated disposal wells. Routine monitoring programs assess the water quality of surface runoff from rain events and of treated wastewater discharged to the environment.

Water management priorities for our Australia-Pacific LNG (APLNG) facility focus on the quality of water discharged to municipal water treatment systems or directed to the receiving environment. This includes water used in the LNG process and runoff from rain events that is discharged to surface water. Routine monitoring programs are in place to assess water quality prior to discharge to municipal systems, at each stormwater discharge point, and inside and outside the discharge mixing zone in the receiving environment.

Water management priorities for our Norway offshore operations are treatment and water quality of discharged produced water. Norway operations treat produced water prior to discharge from offshore platforms in accordance with local regulations. No freshwater is used for offshore operations, except for domestic purposes. Freshwater is used at the Teesside terminal, which receives natural gas, oil or natural gas liquids (NGL) from Norway offshore fields. Norway is our largest user of non-fresh water (seawater) for drilling and for EOR.

Our Norway operations surpassed their 2019 performance goal for oil in water concentration in produced water discharges of less than 10 mg/L. The 2019 value of 6.9 mg/L is more than four times lower than the regulatory limit of 30 mg/L. Potential impacts from produced water being discharged into the sea have been studied for more than 20 years, including in situ water column monitoring. Based on current knowledge, the environmental risk of discharging produced water is very low.