The Lower 48 represents the largest segment in ConocoPhillips today based on production. The company has high-quality positions in the North American unconventionals, which are low cost of supply assets with significant upside potential.

ConocoPhillips has completed its acquisition of Concho Resources. Learn more.

The company’s large onshore Lower 48 position of 10.1 million net acres prior to the acquisition of Concho Resources Inc., much of it held by production, gives access to scalable, low cost of supply inventory that can generate many years of future development. The Lower 48 segment is comprised of two regions covering the Gulf Coast and Great Plains. Current major focus areas for the Lower 48 include the Eagle Ford, Bakken and Permian Basin.

In early 2020, the company sold its Niobrara assets in Colorado and its Waddell Ranch assets in the Permian Basin.

On Jan. 15, 2021, ConocoPhillips completed the transformational acquisition of Concho Resources Inc., an independent oil and gas exploration company with operations across New Mexico and West Texas. The addition of 550,000 net acres through the Concho acquisition complements the company’s position in the Delaware and Midland basins in the Permian, which together with major positions in the Eagle Ford and Bakken trends establish ConocoPhillips as a leader in Lower 48 unconventional development. Further information on the Concho assets, production and reserves will be included in future Fact Sheets. 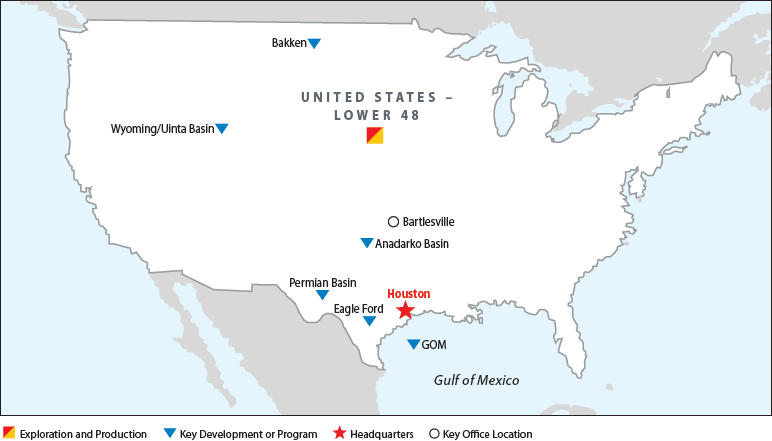 Lower 48 at a Glance

Click on one of the links below to access the handbook. The handbook will also be available in the COP App Store.

Click on one of the links below to access the handbook. The handbook will also be available in the COP App Store.