Houston, Texas – Senator Murkowski – ladies and gentlemen – as today’s conference theme conveys, we are indeed living in a turbulent time.

A few years ago we at ConocoPhillips envisioned a scenario like the current one. We named it the “Tidal Wave.” Its key elements were a flood of new production from technological innovation in producing light tight oil, weak U.S. demand due to renewable fuel standards and more efficient cars, weak demand elsewhere with sub-par economic growth, and low and uncertain commodity prices.

The wave has finally hit. It’s already swept some players under. Now everyone is treading water. But there are even broader implications. The U.S. economy is also being impacted. Along with the economies of other energy producing countries.

The wave has finally hit. It’s already swept some players under. Now everyone is treading water.

Here in the U.S., our industry has been a growth engine. We supported 9.8 million U.S. jobs – at least until recently. We contributed 8 percent of U.S. gross domestic product. Between 2008 and 2013, 40 percent of U.S. GDP growth came from oil and gas and its support industries.

But now there are more troublesome signs. The U.S. Labor Department tracks jobs in the “Oil & Gas Extraction” and “Support Activities” sectors. It reports that about 20,000 of these jobs have been lost as of February. Total job losses of about 100,000 have already been announced by the industry. These are good blue-collar jobs. They pay about twice the private-sector average – and offer good benefits as well.

But since our topic is “Future U.S. Energy Policy,” I’ll reflect on what government could do to keep the U.S. energy renaissance going. All the recommendations I’ll make would be good policy. They would protect current jobs. Create future jobs. Benefit the economy. And improve energy security.

The first one is obvious – permitting of energy infrastructure. Today, it’s road-blocked. We’ve debated the Keystone XL Pipeline for seven years, with still no resolution. Permitting must be streamlined and de-politicized.

Second is resource access. The energy renaissance occurred primarily on private land. But government lands and waters also have energy potential. We should open more of them to exploration.

Third is regulation. We’re not opposed to regulation. It’s needed in many cases. But regulations should be “smart,” transparent, non-redundant, and balanced. They should be based on science, and not hype. And their benefits should exceed their costs.

Fiscal terms are a fourth concern. In too many countries, taxes on production are unrealistically high, particularly in today’s environment. In the U.S., we continually face threats of tax increases. We need fairness and stability everywhere. And the U.S. needs corporate tax reform. It should be industry-neutral, with clear and simple rules. And it shouldn’t impose double taxation of overseas earnings.

Regulations should be “smart,” transparent, non-redundant, and balanced.

There are other ways government could help. For example, through collaboration. We’ve actually had some past successes. Such as offering technical expertise on rulemaking, and working to protect the sand dunes lizard.

Government could also be a better information source. It could help explain to the public the energy “facts of life.” Specifically, that even with greater efficiency and renewable energy, fossil fuels must still supply 75 percent of world energy in 2040.

Government could publically support an “all of the above” energy mix. One that obviously includes oil and natural gas. It could also help inform the public about the benefits of different energy sources. Such as positives from widespread use of shale gas in power generation. It has helped America reduce CO2 emissions by over 10 percent compared to peak 2005 levels. It’s also helped reduce the use of fresh water to pre-1970 levels.

And last, government could particularly help through free trade. Energy should be traded internationally like any other product. We should freely engage in imports and exports. 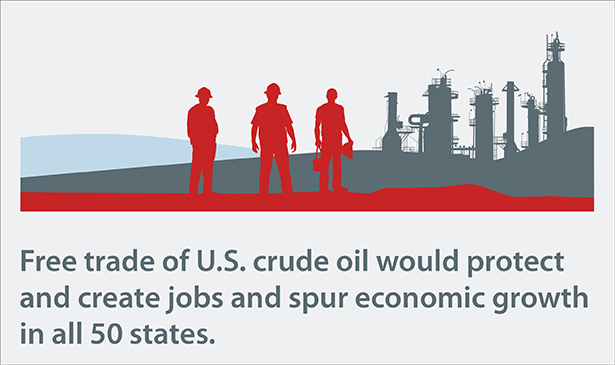 Take natural gas as an example. By 2016, just next year, the U.S. will be positioned to become a net exporter of liquefied natural gas. Several export projects have already been approved by the government. In return, the country will gain job creation and economic stimulation.

Now, consider our success with U.S. oil production. We’ve shifted the oil market’s center of gravity toward North America. U.S. production was only seven million barrels per day in 2009. But we’re now back above 11. The Energy Information Administration just published its 2015 Annual Energy Outlook. It predicts about 15 million a day in 2020. And potentially 25 million by 2040 in the high-resource case.

Most of our new production from shale is condensate and light oil. As you know, all oil is not the same. Many of our refineries in the Midwest and on the Gulf Coast aren’t configured for it. They were built for heavy oil from Canada, Venezuela and Mexico. So there’s a mismatch between our new production, and refining capacity. 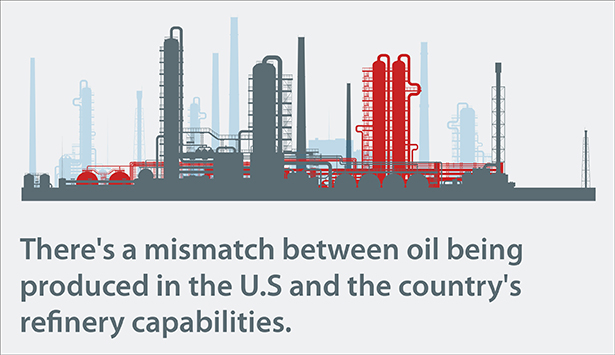 To process more light oil, these refineries may have to operate inefficiently, or at reduced rates. This challenges their economics. So they need to buy oil here at a discount from the Brent price,  which is in the $59 range. That discount has averaged about $5-to-$10 per barrel off the Brent price.

The discount really hurts domestic production. Some new light oil projects start becoming uneconomic below $70 per barrel. The vast majority do so at $40. So the discount is a real threat to U.S. production growth path.

We both import and export wheat and other foods. Such as aircraft, construction equipment, electronics, you name it.

U.S. oil exports would incentivize three million barrels per day in new production, according to consultants. The entire country would benefit. We’d add from 394,000 to nearly 860,000 jobs per year. One-quarter of these would be outside the producing states. We’d gain $86-to-$170 billion in annual gross domestic product. Much of the growth would be in other industries beyond oil and gas. The trade balance would improve by $67 billion annually. Government would gain $1.3 trillion in tax and royalty revenue thru 2030.

The current export ban is an anti-consumer policy. Lifting it would expand world oil supplies. That in turn would help drive gasoline prices down here and overseas.

Supply security would also improve. The U.S. and world would have greater supply diversity. And a greater percentage of world supplies would come from stable sources.

I’ve mentioned the shift in the oil market’s center of gravity. The U.S. now can influence the market, and stabilize it. Our recent production growth eliminated three million barrels per day in crude oil imports. This offset losses in the Middle East and Africa. And it prevented price volatility that would have harmed the global economy.

So I call on the U.S. government to take a hard look at energy’s new world. Recognize its new abundance. Recognize its economic contributions. Recognize too the importance of the U.S. presence in the global market. And enact the policy changes I’ve mentioned.