Imagine you just bought a piece of property in an undeveloped area, 22 miles from the next small town. You plan to build a house, but first you’re required to build the access road to the property. Oh, and by the way, the road must be built of ice.

You spend months creating plans, getting building permits, hiring folks to do the work, purchasing supplies and finally launching construction — which needs to be complete before the road melts away in less than four months’ time. Hope you didn’t forget anything, because there will be no trips to the hardware store once the road’s gone.

Full-time residents and even cabin owners in remote Alaska might not be deterred, but it takes unique people, a solid commitment, a whole lot of planning and tenacity to live — or work — in this type of remote environment.

Road access is one of the greatest challenges to development on Alaska’s Western North Slope.

Alpine, located on the boundary of the National Petroleum Reserve–Alaska, was developed without a permanent road connecting it to other North Slope infrastructure. While Alpine has its own series of gravel pads with connecting gravel roads, there is a 22-mile gap between it and the company’s closest development at Kuparuk — leaving Alpine completely disconnected, not just from the rest of the North Slope, but from the rest of Alaska.

Summer travel across the delicate North Slope tundra must be done in low-impact, specialized vehicles — or by air. Flying speeds things up, but there are still size and weight restrictions for your deliveries.

Enter ice roads … They make continued operations at Alpine and any new development on the Western North Slope possible.

Each winter, a 22-mile ice road is built to allow delivery of heavy equipment and supplies that can’t realistically be delivered to Alpine by air. Each spring, the road melts away without a trace.

“The Alpine resupply road is a critical annual event, but most years it represents only a fraction of the ice construction,” said Jeff Osborne, NPR-A project lead for roads and pads. “Last winter, ConocoPhillips built the equivalent of 140 miles of ice roads and 161 acres of ice pads — one of our biggest-ever efforts — to support the second season of GMT-1 construction and the biggest exploration program ConocoPhillips Alaska has executed since 2002.”

Each average mile of ice road construction requires about a million gallons of ice and water. Ice is chipped from shallow areas of lakes that have frozen to the bottom; water is collected through holes drilled into lakes with thick ice caps.

ConocoPhillips conducts water and fish studies and ongoing monitoring, develops plans and seeks permits many months in advance to ensure efforts meet regulations and reflect the great care the company takes to minimize the effect of its operations on the environment. Ice road routes are carefully mapped out, avoiding not just rough terrain but also grizzly bear dens, cultural sites and other potentially sensitive areas.

In a low snow year, snow is collected and hauled by the truck load. Starting from the end of a gravel road or pad, the snow is pushed onto the ice road route, then packed down by vehicles approved to travel on exposed tundra. This year there was plenty of snow on the North Slope, and prepacking of existing snow began in November.

Still, mother nature is a critical and fickle member of the Western North Slope construction team.

Even with a solid snow pack defining the carefully chosen and permitted ice road route, actual construction couldn’t begin until the top 12 inches of tundra were frozen to a temperature of 23 degrees Fahrenheit.

“Our target start date for ice road construction was December 1, but it was warm this year and it pushed us back by about two weeks,” said Osborne.

The optimum ambient temperature for construction is minus 20 Fahrenheit. This year’s roads were built primarily in zero- and ten-degree weather.

“Water freezes slowly at those temperatures, and you can only build as fast as the water freezes,” said Osborne. “There’s always a lot riding on the opening of ice roads. This year GMT-1 construction and delivery of the drilling rigs and camps for exploration were added pressure. Especially in a busy year like this one, we have to keep our focus on getting the job done safely.”

When the tundra is appropriately frozen and the ambient temperature is cooperating, water and ice chips are spread in layers until the road is a minimum of six inches thick. A motor grader ensures the ice roads (and pads) are flat but have enough texture to keep them safe to drive on. 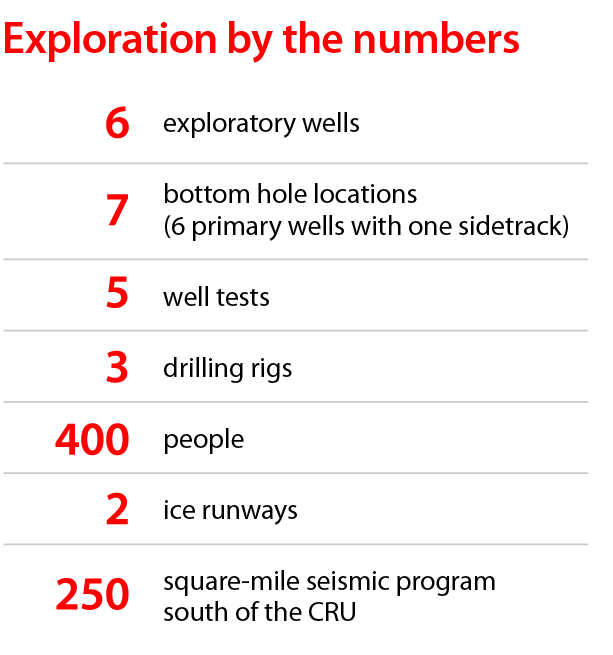 Considering the large work scope and narrow winter window to complete it, segments of the road are planned for completion according to the time sensitivities associated with the work they support. Ice road construction teams are placed at various start points along the ice road route. The teams build the roads, working toward each other, in 10- to 15-mile sections, until there is a web of roads connecting construction and exploration efforts to Alpine and the gravel road system.

Ice roads open in phases. Early openings this year weren’t until the third week of January, with the final sections opening in mid-February. About 50 people are employed for ice road maintenance, with the sole focus of keeping the ice roads safe and drivable throughout this season.

Timing for getting the people and equipment out before temperatures rise can be as tenuous as the winter project launch — but Mother Nature was a bit more cooperative in April than she was back in December. The ConocoPhillips Alaska 2018 seismic program is complete, and the exploration drilling activity and GMT-1 construction are all on track.

In late April or early May, all the ice road team’s work will melt away — and that’s when planning for next winter will begin.