In anticipation of weak 2015 commodity prices, the company has further reduced its expected 2015 capital expenditures to $11.5 billion from the $13.5 billion previously announced. Reductions since the December capital announcement will come primarily from the deferral of onshore drilling and exploration programs in the Lower 48, and deferral of major project spending. At this level of capital, the company expects to achieve 2 to 3 percent production growth in 2015 from continuing operations, excluding Libya.

“We are responding decisively to a weak price outlook in 2015 by exercising our capital and balance sheet flexibility,” said Ryan Lance, chairman and chief executive officer. “In this environment our priorities are to protect our dividend and base production, stay on track for cash flow neutrality in 2017, and preserve future opportunities.”

“While 2014 results may seem overshadowed by the current environment, it is important to recognize that in 2014 we delivered on our strategic plan,” added Lance. “We achieved 4 percent production growth from continuing operations, excluding Libya; realized 8 percent price-normalized margin growth; and increased the dividend by 5.8 percent. The company also delivered strong reserve replacement, with a three-year average organic reserve replacement ratio of 153 percent.”

Organic reserve additions represent a continuing portfolio shift to higher-value liquids and reflect increased levels of activity in development programs and major projects, as well as revisions and extensions of existing fields. Liquids comprised approximately 45 percent of the reserve additions and another 30 percent were tied to liquids pricing through liquefied natural gas. Reserves were added across the portfolio, including approximately:

Final information related to the company’s 2014 oil and gas reserves, as well as costs incurred, will be provided in ConocoPhillips’ Annual Report on Form 10-K to be filed with the Securities and Exchange Commission in late February.

Lower 48 – Quarterly production increased by 44 thousand barrels of oil equivalent per day (MBOED) over the same period in 2013, to 541 MBOED. The increase was primarily from growth in the liquids-rich unconventional plays as well as improved drilling performance, partially offset by normal field decline. Liquids production grew 17 percent year-over-year with a 26 percent increase in crude oil production. In 2014, the company grew its unconventional production by 37 percent.

Canada – Fourth-quarter production was 296 MBOED, an increase of 20 MBOED compared with the fourth quarter of 2013. The increase was primarily driven by improved well performance across the segment as well as increased production from Christina Lake Phase E and Foster Creek Phase F, partially offset by normal field decline in western Canada. Liquids growth of 14 percent compared with the fourth quarter of 2013 was partially offset by reduced natural gas production. Foster Creek Phase F is continuing to ramp up and Surmont 2 construction is on track with first steam expected in mid-2015.

Alaska – Production for the quarter was 186 MBOED, a decrease of 19 MBOED compared with the same period in 2013. This decrease was due to normal field decline and planned downtime, partially offset by improved well performance. ConocoPhillips sanctioned development of Kuparuk Drill Site 2S in October and signed a contract for a new built-for-purpose coiled tubing rig for the Kuparuk River Unit.

Europe – Quarterly production was 215 MBOED, an increase of 18 MBOED compared with the same period a year ago. The increase was primarily the result of new production from major projects, improved well performance and less downtime, partially offset by normal field decline. First production was achieved at Eldfisk II in January 2015.

Asia Pacific and Middle East – Fourth-quarter production was 325 MBOED, an increase of 33 MBOED compared with the fourth quarter of 2013. The increase was primarily the result of growth from major projects and new wells online, partially offset by normal field decline. During the quarter, first oil production began from the floating production system at the Gumusut Field and first gas was produced from Kebabangan. In Australia, APLNG remains on track for first LNG in mid-2015.

Other International – Production from continuing operations, excluding Libya, was 4 MBOED in the fourth quarter, flat compared with the same period in 2013. Production from Libya was 22 MBOED for the quarter, but as a result of ongoing unrest in the region the Es Sider Terminal was shut-in starting in mid-December.

Unconventional exploration – Fourth-quarter North American activity remained focused on drilling in the Niobrara and Permian Basin in the Lower 48, as well as the Duvernay and Montney in Canada. As previously announced, the company expects to significantly reduce its unconventional exploration programs in 2015. Internationally, the Picoplata well in Colombia was spud during the fourth quarter.

Conventional exploration – During the quarter, oil was discovered at SNE-1, marking the second successful well offshore Senegal. In the Gulf of Mexico, the company expensed a Shenandoah down dip appraisal well during the quarter. Appraisal will continue at the Shenandoah, Tiber and Gila prospects in 2015. In Australia, the Barossa-3 well reached total depth with well data indicating a significant gas discovery and drilling began on Barossa-4 during the quarter. In Angola, the Kamoxi-1 well was deemed non-commercial and expensed as a dry hole. Drilling on the second Angola well, Omosi-1, is ongoing.

Production from continuing operations, excluding Libya, for the fourth quarter of 2014 was 1,567 MBOED, an increase of 96 MBOED compared with the same period a year ago. The net increase reflects 68 MBOED, or 5 percent growth, after adjusting for 28 MBOED from lower downtime and dispositions. Growth was primarily due to new production from major projects and development programs, partially offset by normal field decline.

For the quarter, cash provided by continuing operating activities was $2.6 billion, reflecting the $0.5 billion cash outflow from Freeport and a $0.7 billion increase in working capital, primarily from timing of tax payments. Proceeds from asset dispositions were $0.2 billion. In addition, the company funded $4.4 billion in capital expenditures and investments for continuing operations, paid dividends of $0.9 billion, received $0.5 billion from the Freeport LNG termination agreement, and had a $0.4 billion reduction of short-term investments. During the quarter, debt increased by $1.5 billion, reflecting the placement of $3.0 billion in low-interest debt and the early retirement of maturing debt.

Year-over-year production growth was 4 percent from continuing operations, excluding Libya, which represents 2014 production of 1,532 MBOED, compared with 1,472 MBOED in 2013. Production increased due to growth from major projects and development programs, partially offset by normal field decline.

In 2014, cash provided by continuing operating activities was $16.6 billion. The company received proceeds from asset sales of $1.6 billion, funded $17.1 billion in capital expenditures and investments for continuing operations, paid dividends of $3.5 billion and increased debt by $1.0 billion. As of Dec. 31, 2014, ConocoPhillips had $5.1 billion of cash and cash equivalents. The company ended the year with debt of $22.6 billion and a debt-to-capital ratio of 30 percent.

The company will provide additional guidance on 2015 exploration expense; production and selling, general and administrative expense; corporate segment costs; and depreciation, depletion and amortization at its Analyst Meeting in New York on April 8, 2015.

ConocoPhillips will host a conference call today at 12:00 p.m. EST to discuss its fourth-quarter and full-year results. To listen to the call, and view related presentation materials and supplemental information, go to www.conocophillips.com/investor/earnings.

ConocoPhillips is the world’s largest independent E&P company based on production and proved reserves. Headquartered in Houston, Texas, ConocoPhillips had operations and activities in 27 countries, $53 billion in annual revenue, $117 billion of total assets, and approximately 19,100 employees as of Dec. 31, 2014. Production from continuing operations, excluding Libya, averaged 1,532 MBOED in 2014 and preliminary proved reserves were 8.9 billion BOE as of Dec. 31, 2014. For more information, go to www.conocophillips.com.

This news release contains forward-looking statements. Forward-looking statements relate to future events and anticipated results of operations, business strategies, and other aspects of our operations or operating results. In many cases you can identify forward-looking statements by terminology such as "anticipate," "estimate," "believe," "continue," "could," "intend," "may," "plan," "potential," "predict," "should," "will," "expect," "objective," "projection," "forecast," "goal," "guidance," "outlook," "effort," "target" and other similar words. However, the absence of these words does not mean that the statements are not forward-looking. Where, in any forward-looking statement, the company expresses an expectation or belief as to future results, such expectation or belief is expressed in good faith and believed to have a reasonable basis. However, there can be no assurance that such expectation or belief will result or be achieved. The actual results of operations can and will be affected by a variety of risks and other matters including, but not limited to, changes in commodity prices; changes in expected levels of oil and gas reserves or production; operating hazards, drilling risks, unsuccessful exploratory activities; difficulties in developing new products and manufacturing processes; unexpected cost increases; international monetary conditions; potential liability for remedial actions under existing or future environmental regulations; potential liability resulting from pending or future litigation; limited access to capital or significantly higher cost of capital related to illiquidity or uncertainty in the domestic or international financial markets; and general domestic and international economic and political conditions; as well as changes in tax, environmental and other laws applicable to our business. Other factors that could cause actual results to differ materially from those described in the forward-looking statements include other economic, business, competitive and/or regulatory factors affecting our business generally as set forth in our filings with the Securities and Exchange Commission. Unless legally required, ConocoPhillips undertakes no obligation to update publicly any forward-looking statements, whether as a result of new information, future events or otherwise.

References in the release to earnings refer to net income attributable to ConocoPhillips. 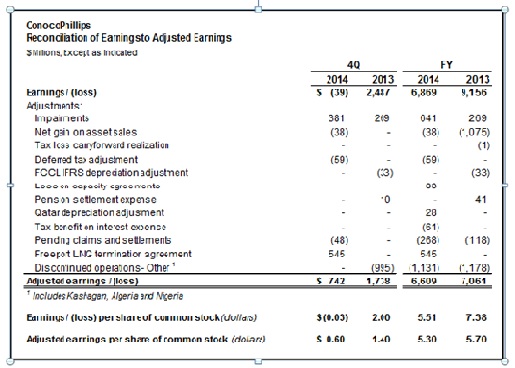 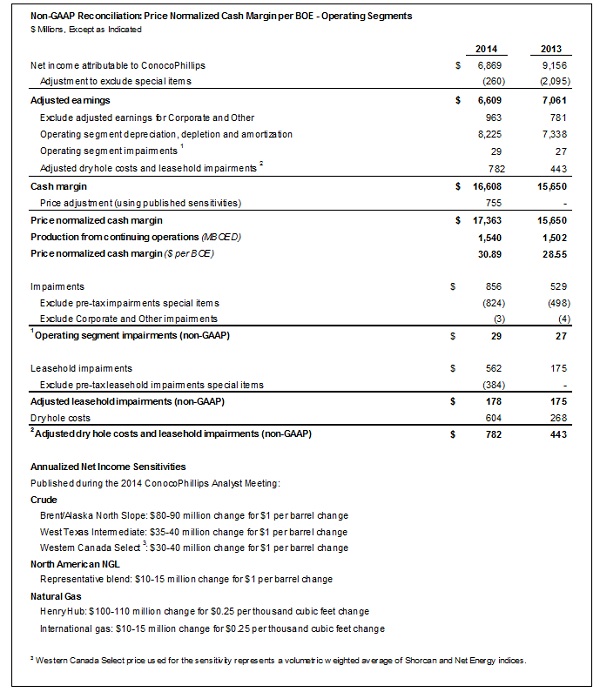