But would it perform in the field?

Ramesh, working in conjunction with technical colleagues, had invented a way to use treated produced water during hydraulic fracturing.

“It was a major breakthrough,” Ramesh said.

The recipe involved taking produced water and putting it through a series of specific chemical treatments to remove solids, iron, bacteria and other contaminants.

“We knew we had a novel recipe,” Ramesh said, “and we needed an opportunity to test it.” 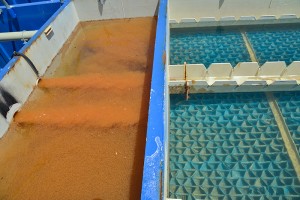 Click here to learn how ConocoPhillips manages water, which is integral to its operations.

He approached the Permian business unit’s management team to see if they were willing to try it out on a horizontal well.

“They gave me a vertical well,” he said.

And one caveat: He would only be able to try the recipe on one stage during the completion process; management didn't want to risk the entire well on an unproven concept.

Ramesh assured the Permian managers the 4,000 barrels of treated produced water would perform as expected.

“So we did one stage with the recipe we had,” he said. “It worked.”

This innovative test, which took place in 2012, marked the beginning of the water recycling revolution at ConocoPhillips and the oil and gas industry.

It also spotlighted Ramesh's unique water management skills and his ability to make a difference in complex water reuse issues facing the industry.

In the following years, Ramesh managed numerous water reuse pilot projects, working to optimize the produced water recycling process — specific to the formation water chemistry of every region — and come up with a unique recipe to make it economically feasible.

“I was a key contributor on most of the chemistry and chemical engineering required to develop the recipe and collaborated with key academic and industry subject matter experts,” he said. “However, virtually all of the execution work has been done in collaboration with others who often contributed more than I. I was fortunate to have the opportunity to collaborate with excellent early adopters.”

In turn, these plants have delivered approximately 20 million barrels of recycled water in the past 20 months. And with its increased Permian position, ConocoPhillips' reuse volumes are expected to grow significantly.

The economic and environmental impact of Ramesh’s water management work is significant.

Ramesh has also made significant contributions in the area of sand management.

In recent years, ConocoPhillips has been drilling longer laterals and using a finer-grained sand during the completion process.

However, a small fraction of this sand returns to the surface over days or weeks during early stages of the well's life.

Moving at a high rate of speed, the sand erodes equipment and pipes, much like a sandblaster removes paint from a car. It also clogs wellsite equipment, causing inefficiency and product losses.

“Temporary conventional desanding equipment was only partially effective in preventing sand carryover to production facilities,” Ramesh said. “We knew the sand problem would only manifest in magnitude and multiply.”

Thus, a new and improved method of sand removal was needed to efficiently capture produced sand to improve uptime.

“Early research and development investigation suggested that offshore cyclonic sand removal technologies could be tailored for unconventional reservoirs application,” he said. “In 2014, we collaborated with a third party to design and construct a first true cyclonic desander for long horizontal wells. We found a way to miniaturize an offshore desanding tool.”

Since 2014, Ramesh has played a pivotal role in sand management, collaborating with the Lower 48 and Canada business units to protect facilities from sand erosion during flowback and initial production.

This desanding technology has proved so effective, it has become the new company standard, often reducing well clean-up time (~14 days vs. ~100 days) and operating expenditures (~ $50,000 per well). It has also decreased wear-and-tear on equipment, accelerated flowback and mitigated health, safety and environmental risks.

"There are no moving parts," he said. "The well head momentum is high enough to spin the sand out."

To date, ConocoPhillips has deployed approximately 200 of these desanders in its unconventional reservoirs.

By accelerating the adoption of produced water recycling and desanding technologies, Ramesh has helped ConocoPhillips enhance performance and reduce cost of supply. Moreover, these innovations are advancing ConocoPhillips’ sustainability efforts, especially in the Permian Basin, where operations have expanded after the acquisition of Concho Resources.

ConocoPhillips recently celebrated Ramesh’s contributions, honoring him with a 2021 SPIRIT Award for Innovation, a recognition bestowed upon an employee who best exemplifies the company’s high standards of performance.

With a “fail forward” mindset, Ramesh is always testing boundaries, an embedded attribute of this innovation champion.

“I’m glad to be part of a culture where we can try out things and try to improve,” he said. “I have a drive to solve business problems. I like the intensity of it.”

Quick quote: "Some people are gifted. But hard work has been my approach."

Water recycling in the Delaware Basin

ConocoPhillips in the Permian Basin: Competitive now, poised for growth