From triple carbon copies to smartphones

With a beehive hairdo, 21-year-old Sandy Kusano first tapped away on a company Smith Corona manual typewriter a year after North America’s largest oilfield (Prudhoe Bay) was discovered and the year the second largest field (Kuparuk) in North America came to be.

New on the job at heritage company ARCO Alaska in July 1969, Kusano is one of two ConocoPhillips employees who has reached the career milestone of 50 years of service.

“When I look back, I never dreamed I’d be here this long,” said Sandy, now procurement associate, Requisition to Pay & Materials Supply Chain. “So many exciting things.”

In Alaska, Sandy has witnessed a renaissance of vast oil and gas discoveries, along with mergers, acquisitions, drilling records and the first-ever development on federal leases and Alaska Native lands. She has worked through the cycles of oil prices, seeing it soar from $4.87/barrel in 1978 to $125/barrel in 2008. Sandy applauded the rise of ConocoPhillips Chairman & CEO Ryan Lance, whom she remembers being hired out of college. She has flown to the North Slope and landed on ConocoPhillips’ former Cook Inlet platforms. In 1982, she watched the Alaska Tower be built. She remembers coffee delivery through the halls by a cart during the early 70s and cost-cutting measures at ARCO that included power conservation and a limit on toilet paper. The stalls were not stocked beyond one roll, she said. “Now I look back and chuckle.”

“Wow, 50 years! That’s incredible.” said Mike Rodriguez, superintendent, Western North Slope Operations, whose work path has crossed with Kusano’s since the 80s. “That vast amount of all that historical knowledge I’m sure has helped her group avoid pitfalls of the past and enrich the conversation and decisions made.”

From miniskirts to bell-bottoms to pantsuits, Sandy has dressed for success. Technology, too, has undergone revolutions during her time at the desk, from the triple carbon copies she typed in the late 60s to today’s facial recognition smartphones.

“Working for 50 years at one company, to some, may seem way too long, but I continue to have the drive like the Energizer Bunny,” Kusano said.

Tim Green would agree. He was her 27th boss and recent supervisor, who moved to Houston in June as manager of Lower 48 Supply Chain. “Anytime we have a change in a system, website or process, she’s the one learning it and teaching others. When we migrated from Livelink to SharePoint, she worked with the technical folks to get it done,” said Green. 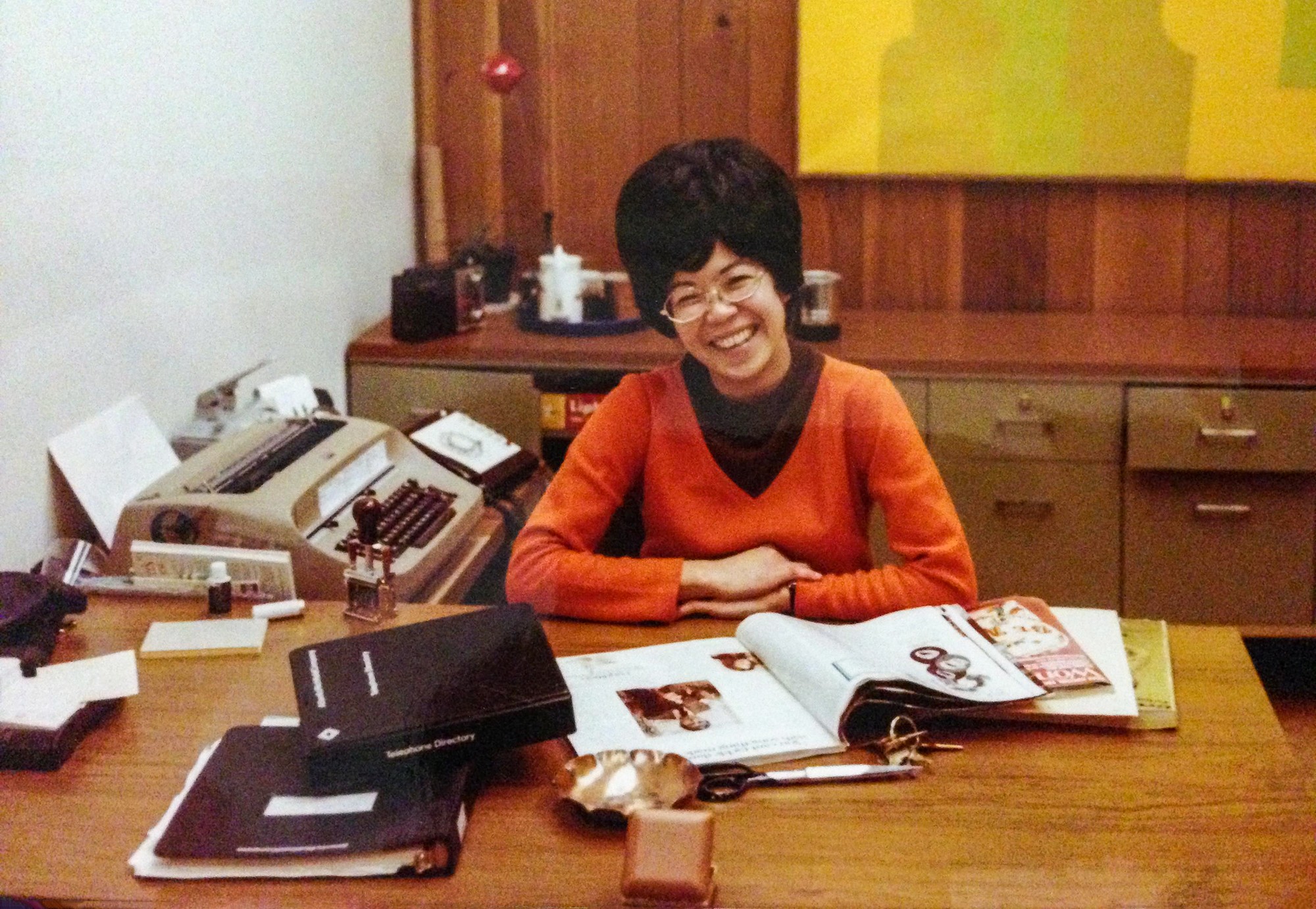 With a beehive hairdo, 21-year-old Sandy Kusano first tapped away on a company Smith Corona manual typewriter a year after North America’s largest oilfield (Prudhoe Bay) was discovered and the year the second largest field (Kuparuk) in North America came to be.

Over this stretch, Kusano has worked in purchasing, logistics, building services, public relations, production and drilling, Prudhoe Bay operations, projects, finance, procurement and now Alaska Supply Chain. Sandy has served as a secretary, accounting specialist, invoice clerk, administrative assistant and procurement associate, but titles do not convey how her work sets her apart.

“I can’t imagine having 50 years in or having the level of dedication and energy she has to do her job every single day. You’d think things would get monotonous, but they don’t for her,” Green said.

Dorothy Wood, supervisor, EPC Category Management in Houston, worked with Sandy in Alaska from 2008 to 2011. “What stands out to me is her motivation. She wakes up on winter mornings to go to the gym, and in the summer, she’s biking to work every day. Sandy enjoys life and everything it has to offer,” Wood wrote. “When I moved to Anchorage from Austin, Texas as a college new hire, Sandy essentially adopted me. She was my Alaska mom. Sandy is one of the kindest people you will meet and will do anything she can to help you.”

Green calls Sandy the lifeblood of the organization. “She keeps a pulse on how things are going and lets me know about any morale issues. Good morale is really critical because we’re in an environment where we have to work together. We’ve got to mentor each other and learn from each other. If you’ve got things that are in the way of that, it’s just not productive.”

Sandy’s advice? “Go with the flow. Work hard. Pursue your goals. Be yourself. Don’t hesitate. If something is funny, just laugh.”

Green said her laughs are infectious, and people congregate around her. “She goes beyond her job responsibilities to create a fun environment in this department.” A smorgasbord of snacks occupies its own table near her front desk like a recharging station for employees on the run.

“She has a kind heart and wants to take care of people and see people happy,” Green said, remarking on the dozens of holiday treats she prepares for the employees’ kids. “It’s rare to find somebody who is that thoughtful and is also dedicated and good at their job.”

Easter basket giveaways or not, Kusano is no pushover. “As an administrative assistant she provides support for early-career, mid-level and senior-level professionals. If those individuals are missing steps in the process, she takes them to task, reminding them they need to get things done. Her personality has allowed her to develop an authority that people respect,” Green said.

July 1 marks 50 years. On July 2, Kusano was at the center of a surprise company celebration in Anchorage. What would she say to her 21-year-old self upon arriving at an energy company on the cusp of tremendous change? “Be yourself. Be kind. Learn as much as you can. Be patient.”