Andy Frerman: Wax on, wax off — Overcoming the paraffin challenge

Andy Frerman is an Eagle Ford staff corrosion engineer for the Gulf Coast business unit. With a background in biochemistry, Andy primarily focuses on internal corrosion and flow assurance, managing chemicals such as biocides that mitigate the corrosive effects of bacteria in wells, tanks and pipelines. 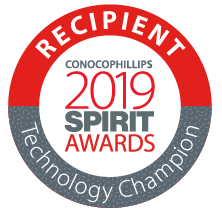 “The more water you move around, the more you expose the pipes to bacteria. It’s ubiquitous.”

In addition to bacterial corrosion, high concentrations of paraffin wax have been an acute challenge in the Eagle Ford.

Andy received the 2019 SPIRIT of Performance Technology Champion Award for his groundbreaking flow assurance project that addressed the paraffin challenge.

Andy and his team identified the high cost of inaccurate instrumentation measurements and came up with a new application that captures millions of dollars of value. In simple terms, the new application creates surfaces that paraffin doesn’t stick to.

“After installation, we saw immediate improvement. It was durable and had longevity.”

The initial run went for a year with no work orders related to paraffin deposition. Previously, maintenance needed to be performed nearly every six weeks.

After a year in service, it looked like a success. “When we pulled the old probes everything looked great, and we found zero paraffin deposition in the coated units. At that point we knew this application worked.”

Andy is quick to acknowledge the support of the Eagle Ford team. “We have some amazing people down here who are dedicated to getting the job done.

“Receiving the SPIRIT Award has been quite humbling. I just try to do my job and make a difference. It’s nice to be recognized.”

Andy took a circuitous path to ConocoPhillips, starting with an eclectic educational background.

“I started off at the University of Colorado as a Political Science major, but I wasn’t sure that that’s what I wanted to do. So, I took a little break to get some focus.”

“I did that for a while and really enjoyed it, but it didn’t take long to figure out that’s a young man’s game. I couldn’t see myself bent under a horse in my 50’s.”

After some consideration of Veterinary school, Andy obtained his degree in biochemistry, and the rest, as they say, is history.