High-performance computing: The need for speed

To stay atop the fast-paced exploration and production (E&P) industry, a realm where innovation drives performance, ConocoPhillips has a need, a need for speed.

And it has just the tool for the job.

By empowering faster and better decisions, this transformational tech tool not only helps ConocoPhillips lower cost of supply, it gives the company a competitive advantage.

ConocoPhillips’ geoscientists, engineers and data scientists use the supercomputer to interpret, model and drill the subsurface; develop technology; and improve workflows.

A subsurface sensation, the supercomputer plays a key role in accelerating the time to first oil; reducing drilling uncertainties and risks such as dry holes and fault avoidance; and optimizing reservoir understanding and production.

Just how important is the supercomputer to ConocoPhillips?

“It’s a critical piece of the company’s ability to be successful,” said Norman Weathers, Supervisor, HPC Operations, a subgroup of Geoscience IT Operations.

ConocoPhillips’ HPC cluster fills a 10,000-square-foot room at Cyrus One, a data center facility in northwest Houston. It has thousands of connected compute nodes that work together like a single system. Functioning like a giant brain, the HPC cluster takes a divide-and-conquer approach to the work it's given, running parallel applications efficiently, reliably and quickly.

Researchers and businesses use supercomputers for problems that would overwhelm ordinary computers, leveraging their immense compute power for computational modeling, simulations and data analytics.

For example, scientists are using Frontera, the fifth-fastest supercomputer in the world, to solve pressing scientific and engineering challenges. Currently, they're using Frontera in the battle against COVID-19; and in 2019, they called upon this supercomputer for storm-surge forecasting during Hurricane Dorian. As an industrial partner with the Texas Advanced Computing Center at UT Austin, ConocoPhillips has access to Frontera for testing purposes.

Ranked among the top 50 supercomputers in the world, ConocoPhillips HPC cluster’s computing power can be measured at 9 Petaflops, or 9 thousand million million (or 9x1015) floating point calculations per second. It has 5,136 nodes, 152,064 cores, 1.5 petabytes of memory, 106 compute racks, 55 petabytes of parallel storage and a network with connections speeds of 2.98 terabytes a second. Linked to a high-speed network, the HPC cluster runs high-performance file systems.

The HPC cluster is always evolving, he said, with new hardware or software updates.

“Its design is driven by business needs,” Velazquez said. “We make sure they have enough resources to get their work done efficiently and in a timely manner.”

The supercomputer is the perfect tool to solve the Subsurface team’s data-intensive challenges.

“Seismic gets the lion’s share,” Weathers said, noting this group uses 4,656 of the 5,136 nodes. And the company’s reservoir engineering group, the second-biggest user group, uses 480 nodes.

And while the Geophysical Services and Reservoir Engineering teams get most of the supercomputer’s processing power, other teams use it, too.

For instance, Marine uses it for computational fluid dynamics, and Oil Sands uses it for steam allocation optimization in Canada. In addition, reservoir engineers in the business units, along with data scientists from the company’s Analytics Innovation Center of Excellence (AICOE) use the supercomputer to process complex calculations and draw insights from big data sets.

What is an HPC cluster? A high-performance computing (HPC) cluster is a collection of many separate servers (computers) called nodes that are connected by a fast interconnect. HPC involves aggregating computing power so it delivers much higher performance than one could get out of a typical desktop computer to solve science, engineering or business problems.

Basics components of a cluster:

Because seismic surveys and interpretation involve massive datasets and complex algorithms, ConocoPhillips’ supercomputer is a vital business tool for the Seismic Imaging team.

The supercomputer enables them to process all the data collected from compressive seismic imaging, or CSI, ConocoPhillips’ proprietary technology that helps the seismic team gain clearer pictures of rock formations below the Earth’s surface.

“Having a high-performance computing system is a critical element to the compressive seismic imaging program,” said Brad Bankhead, manager, Seismic Imaging. “Compressive seismic is dealing with problems in the trillions of computations.”

Since the introduction of CSI, the amount of seismic data collected and processed has ballooned. For instance, 10 years ago, Bankhead said a typical seismic survey had 15 billion different samples. Today, it’s 30 trillion samples.

“Seismic has always been big data,” Bankhead said. “The physics involved is extremely complicated, and the algorithms are compute intensive.”

“The HPC team is vital to our success,” Macy said. “They collaborate with us closely to understand our challenges and how to optimize the entire system. Our HPC environment is fit-for-purpose for our seismic imaging workflows. When new challenges or needs come up, they can adapt quickly to help us succeed.”

It’s important to note that all computers require coding; it’s how programmers get a computer to perform a task. That said, while the Seismic Imaging team writes the research codes for the supercomputer, the HPC Operations team optimizes them.

And that optimization work is vital, Bankhead said.

For instance, on one seismic project, Bankhead said his team estimated it would take five to six months to run their research codes on the supercomputer. However, the HPC Operations team optimized the codes, which reduced the runtime to one to two weeks.

“My job is to find what computer-related barriers are keeping someone from being as productive as possible and removing those barriers,” he said. This includes finding bottlenecks within a program, he said, or reworking the science of a program to be more computer friendly.

“The Seismic Imaging development and processing team is constantly creating new algorithms and testing to see if they work,” Osborne said. “Once we know they work, then if performance is a bottleneck for the algorithm, they send it my way to optimize so seismic processors can incorporate it into their workflows.”

When needed, Osborne also updates the code base, so it works optimally on the newest hardware.

“The HPC team helps ConocoPhillips to accomplish science unattainable without specialized computers,” he said. “We want to make new or better science possible by making programs run orders of magnitude faster: whether that’s changing a program from running in a day to a lunch hour, hours to minutes, or weeks to days.”

As supercomputers excel at large-scale simulations, they are the optimal tool for producing reservoir simulation models and production forecasts.

“We look at runtime,” Scheepens said.

Before this refresh, Scheepens said one particularly large forecasting model had a runtime of 16-24 hours. This meant that the reservoir engineers could only run one model a day.

However, after the refresh and some code optimization, the model’s runtime dropped to eight hours, resulting in more simulation runs per day.

These speed gains have opened the door to uncertainty quantification studies, by allowing reservoir engineers to run many iterations of simulation models using different parameters sampled from various statistical distributions.

System Analyst Joseph Sonnier, an HPC team member, works as an embedded member of the reservoir modeling and simulation group. He’s a facilitator and liaison between two disciplines, one having a business focus and the other an IT technical focus.

“I want our reservoir engineers to make the most effective use of current and future computer technologies,” he said.

“In most cases, I’m trying to head off any potential problems before the end users even notice,” he said.

For instance, Sonnier cited a functional improvement they created that allows reservoir simulation jobs to burst into the larger seismic cluster when all the reservoir compute nodes are busy.

“The ability to burst helps keep the reservoir jobs from waiting in the queue longer than needed,” he said.

“You would not understand what Joseph does until something breaks,” Bhowmik said, “and then you would know how valuable he is.”

“Our workflow is very high end,” Shibli said. “It’s very specialized. The HPC Operations team is critical to our workflow.”

Machine learning is useful because it automates processes and saves time. This allows humans to focus their time and energy on more complex decision making. In machine learning, data scientists build, train and deploy a model to generate predictions. Finding the optimal model is important, but it’s also time consuming.

Doug Hakkarinen, AICOE, Staff Data Scientist, said the supercomputer speeds up the advanced analytics team’s modeling workflows. This enables them to explore large numbers of features, algorithms and hyperparameters to improve modeling solutions for the business.

“Fortunately, most of these optimization methods can benefit from large-scale parallelism such as that provided on the HPC,” he said.

In recent years, Hakkarinen said the advanced analytics team has used the supercomputer to solve various global business problems. These include a steam allocation optimization project in Canada; a train efficiency optimization project at the Teesside oil terminal in the United Kingdom; a reservoir dynamic model in China; and a rod-pump failure project in the United States.

All this activity wouldn’t be possible without ConocoPhillips’ HPC Operations team, which manages, monitors and maintains the supercomputer. 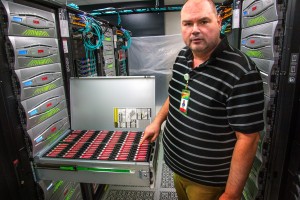 Known for their computing expertise, the HPC Operations team ensures the supercomputer fulfills its performance expectations; these specialists are the interface between ConocoPhillips’ technical experts and a complex, powerful technology.

How they do it:

“We’re a relatively small team that does everything,” Weathers said. “We treat the parts, but we also treat the whole.”

The HPC Operations team collaborates with the business units and functions to ensure they have the computing power they need. They update and expand the cluster annually.

“We want there to be enough capacity so people can do experiments and run iterative-type workflows,” Weathers said. “So we want them to use this instrument as they need to, to get the best result without waiting a long time.”

The HPC Operations team must balance the constant push to stay on the best cost-performance curve, while still matching the business units and functional group’s changing objectives.

“We try to optimize the system to ensure the peaks in demand can be handled without impacting the people or process,” Weathers said.

Moving ahead, ConocoPhillips’ top minds will increasingly call upon the supercomputer to help them make faster, better decisions. No doubt, the need for speed will only accelerate, a byproduct of ConocoPhillips’ data-driven culture.

It’s why having a supercomputer is vital to ConocoPhillips’ success; it’s the ultimate E&P tool.