End of an era

On March 31, 2021, John Haifley II retired from ConocoPhillips. His retirement ended 80 years — 93 service years— of a Haifley as a dedicated employee of ConocoPhillips or one of its heritage companies Continental Oil Company and Conoco.

Tom Haifley joined Continental Oil Company in Lance Creek, Wyoming in 1941. Although he and his wife Thelma were married in Ponca City in 1931, and both of their children were born there, he did not work for Continental Oil Company there. He was managing a tire store in San Antonio when he decided to move to Lance Creek because his brother-in-law worked there and wrote that Continental was hiring. It was a daring thing to move a family of four 1,200 miles without a certain job at the other end.

His gamble paid off. Continental hired him. His first job was probably as a tester in the new gas plant, because he had gained a knowledge of chemistry during his one year at Oklahoma A&M.

The Haifleys lived in a company camp. In the 1930s, 40s and 50s oil was discovered in remote areas where roads and communications were poor. It was expedient for oil companies to build company housing near remote drilling, production and gas plant operations. The camps usually consisted of 20 to 60 two and three-bedroom frame houses with shingle siding.

In 1948, Tom was transferred to the Rincon Field in Starr County, Texas. Again, the family lived in the company camp. By June 1957, he was the Rincon Gas Plant superintendent, a position he held until shortly after 1961 when he was transferred to Lafayette, Louisiana. Tom retired from Conoco in 1971 with 30 years of service. He died in San Antonio in 1978.  His wife Thelma died in San Antonio three years later. 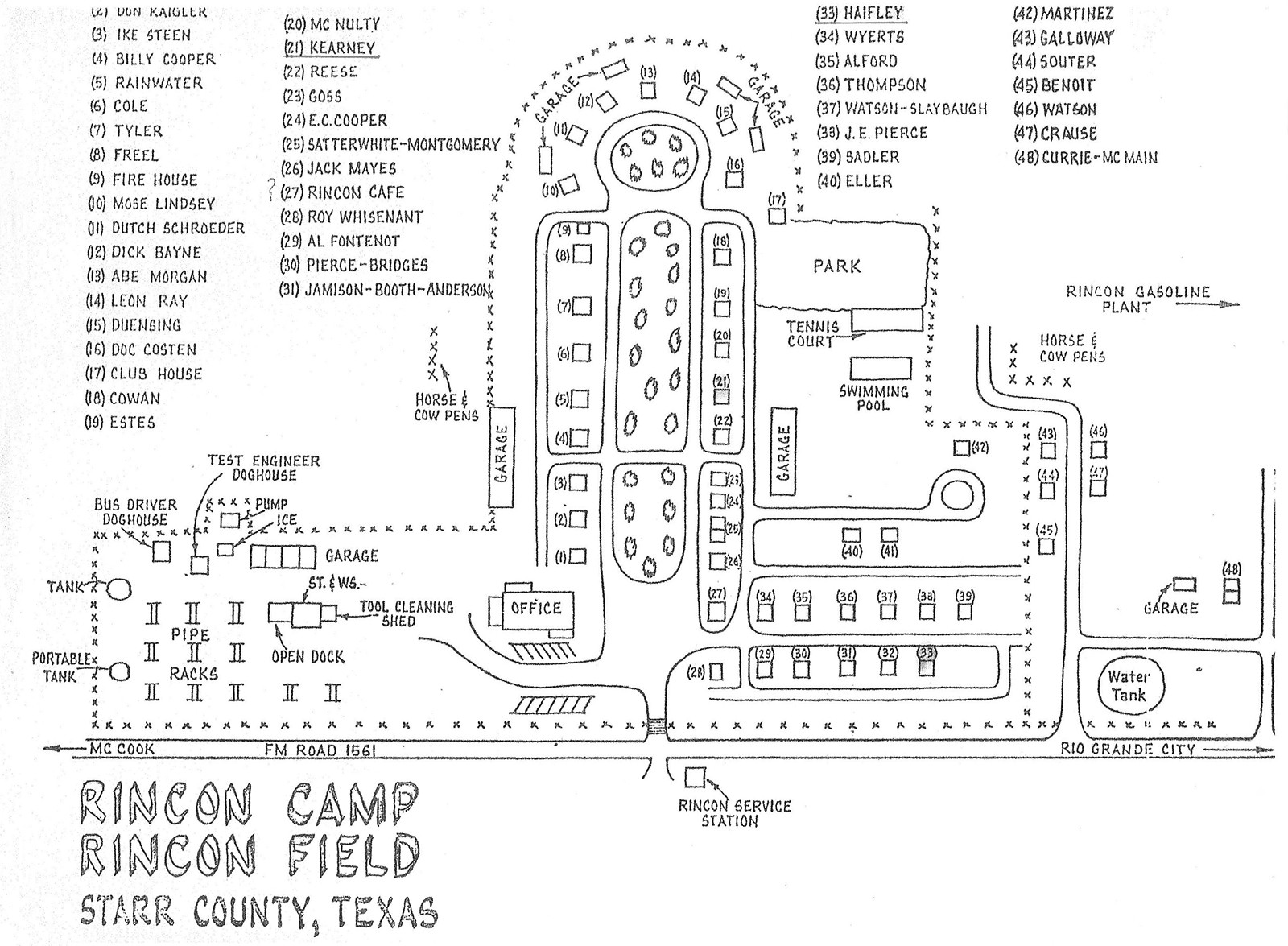 When the Haifley family moved to Rincon in 1948, John was 12 years old. He soon met Barbara Kearney who was almost 12 and lived at the Rincon camp. Barbara’s father, Vance, worked for Continental Pipeline. As shown on the Rincon Camp plot plan, the Haifleys lived in unit 33 and the Kearneys in unit 21.

John and Barbara grew up together at Rincon. They chased roadrunners, avoided rattlesnakes and cactus, rode the school bus to Rio Grande City, and fell in love. In August 1958, after John had served three years in the U. S. Army and Barbara had earned her nursing degree, the two were married in Mission, TX.

A history of service

John Haifley II worked for Conoco and ConocoPhillips for 31 years.

John attended Pan-American College and Barbara worked at the Mission hospital. When Barbara became pregnant, John decided to quit college and go to work. He applied at Conoco’s Benavides District, and was accepted.  He began work as a roustabout a few months before John II was born in August 1959. At first, John lived alone in Benavides and commuted to Mission on weekends as Barbara continued to work and await the birth of their first child. Once John II was born, the whole family lived in Benavides.

In 1960, Conoco moved the Haifleys to Carrizo Springs, Texas where John worked as a roustabout at Conoco’s Chittim Ranch oil field. Mike and Mary were born in Crystal City while they lived in Carrizo Springs, Mike in 1961 and Mary in 1962.

Conoco relocated the Haifleys to Kilgore, TX  in 1964, and then to Andrews, TX in 1965. At those locations John worked in Conoco’s Production Department as a pumper.

In 1976 John was relocated to Lake Charles (Gillis Plant) as Senior Maintenance Foreman. John retired in Lake Charles, Louisiana in 1991 after 32 years of loyal service to Conoco. After his retirement John did contract work for Conoco, training engineers from other countries. John died in Kerrville, Texas on January 12, 2020. Barbara now lives in the Austin area, near her son Mike and daughter Mary.

After graduating high school in Louisiana, John II attended Louisiana Tech University, where he earned a BS degree in Geology in 1982.

He began his Conoco career in the NG&GP Department at Mont Belvieu, TX in Dec. 1990 and worked there until Feb. 2003. His various assignments included mechanic, operator and maintenance tech. From Mar. 2003 through Feb. 2016, he worked as a multi-skilled operator, one call specialist and project lead in the Minden Gas Field, LA. From Mar. 2016 through Sep. 2018 he worked as an MSO in the Madden Shallow Field, Lysite, WY.

Beginning Oct. 2018, John II worked as an MSO and Maintenance Lead in the Delaware Basin, Loving, NM. He retired there effective Mar. 31, 2021. John II and his wife Christine moved to northern Louisiana, near their children and grandchildren, and their roots.