The discovery of the Ekofisk field in 1969 was a turning point for Phillips Petroleum, the oil and gas industry, and the nation of Norway.

In 1969, Phillips Petroleum Co. was in the doldrums. Earnings were in a slump, management had laid off more than 1,000 employees, and dry holes were hurting the bottom line. Company geologists were excited about prospects in the North Sea, but the company and its partners had drilled a number of dry holes offshore Norway in a two-year span.

After careful consideration, Phillips and the Ekofisk licensees fulfilled their commitment and drilled the last hole. That decision culminated in the first commercial oil well in the Norwegian sector of the North Sea and the first giant oil field in Western Europe. The discovery helped shore up Phillips’ reserves and turned Norway into a wealthy oil-producing nation.

Phillips Petroleum applies for exclusive rights to explore for oil and gas in the waters off Norway — the first company to approach Norwegian authorities about the possibility of finding oil and gas in Norwegian waters.

On Aug. 21, the company spuds what is meant to be its last well in the Norwegian North Sea. To avoid the risk of an uncontrolled blowout, the well is plugged, and work resumes 1,000 meters away. An oil reservoir is penetrated on Oct. 25. On Dec. 23, Phillips Petroleum informs the Norwegian government that it has discovered oil. Ekofisk is a giant discovery, originally estimated to contain more than 3 billion barrels of recoverable oil.

First oil is produced in June by subsea wells to the Gulftide jack-up rig, with the oil loaded into tankers.

Norway officially becomes an oil-producing nation. Since Ekofisk was discovered, Norwegians have pumped billions of kroner of oil and gas from the Norwegian Continental Shelf.

The Government Pension Fund Global, now worth approximately $1 trillion, was set up in 1990 to give the government maneuvering room in fiscal policy should oil prices drop or the national economy contract. It also serves as a tool to manage the financial challenges of an aging population and an expected drop in petroleum revenue. The fund was designed to be invested for the long term, but in a way that made it possible to draw on when required. Despite its name, the fund currently has no formal pension liabilities.

Ekofisk 2/4 Q comes into use as an accommodation platform. Gulftide ceases production late in the year and is removed from the field. The Ekofisk storage tank is towed to the site.

International oil crisis  Members of OPEC institute a boycott in October of countries that had supported Israel in the Yom Kippur War, leading to global shortages. This boosts oil prices by 70%, followed by a further 130% jump in December. They climb from around $2.80 per barrel before the crisis to roughly $10.50 when the crisis is over in 1974.

Ekofisk 2/4 A and B platforms come on stream. Ekofisk 2/4 FTP (field terminal platform) and the southern flare stack become operational.

The Ekofisk 2/4 P pumping platform and the Norpipe oil pipeline to the U.K., with the 36/22 A and 36/4 A booster platforms, become operational. Offshore loading ceases.

Processing facilities on the Ekofisk tank and the northern flare stack start operation. The Tor, West Ekofisk and Cod fields are tied back to the new Ekofisk 2/4 R riser platform. Gas is piped through a new Norpipe line via the B-11 and H-7 compressor platforms to Emden in Germany.

Bravo blowout  In April, during overhaul of well B-14 on Ekofisk 2/4 B, well control fails due to an incorrectly installed downhole safety valve. After eight days and several attempts, the blowout is stopped, without injury to personnel or permanent damage to the environment.

The Albuskjell, Edda and the Eldfisk Complex are tied back to the Ekofisk Complex.

Alexander L Kielland accident  On March 27, the Alexander L. Kielland accommodation rig capsizes near the Edda platform in the Greater Ekofisk Area during a storm, killing 123 people in what would be the most serious industrial accident in Norwegian history.

This incident and the Ekofisk Bravo blowout result in increased attention to health, safety and the environment. Acts and regulations are strengthened, and equipment, procedures and training are prioritized.

The Amoco-operated Valhall field produces to a new riser platform, Ekofisk 2/4 G, which is linked by a bridge to the Ekofisk tank.

The Ekofisk 36/22 A booster platform is shut down.

The Statpipe gas pipeline is tied to the Ekofisk Complex via the 2/4 S riser platform.

All steel platforms at the Ekofisk Complex are jacked up six meters to compensate for subsidence in the seabed. To increase reservoir pressure and boost production, the water injection platform Ekofisk 2/4 K is put on stream, a huge engineering accomplishment. 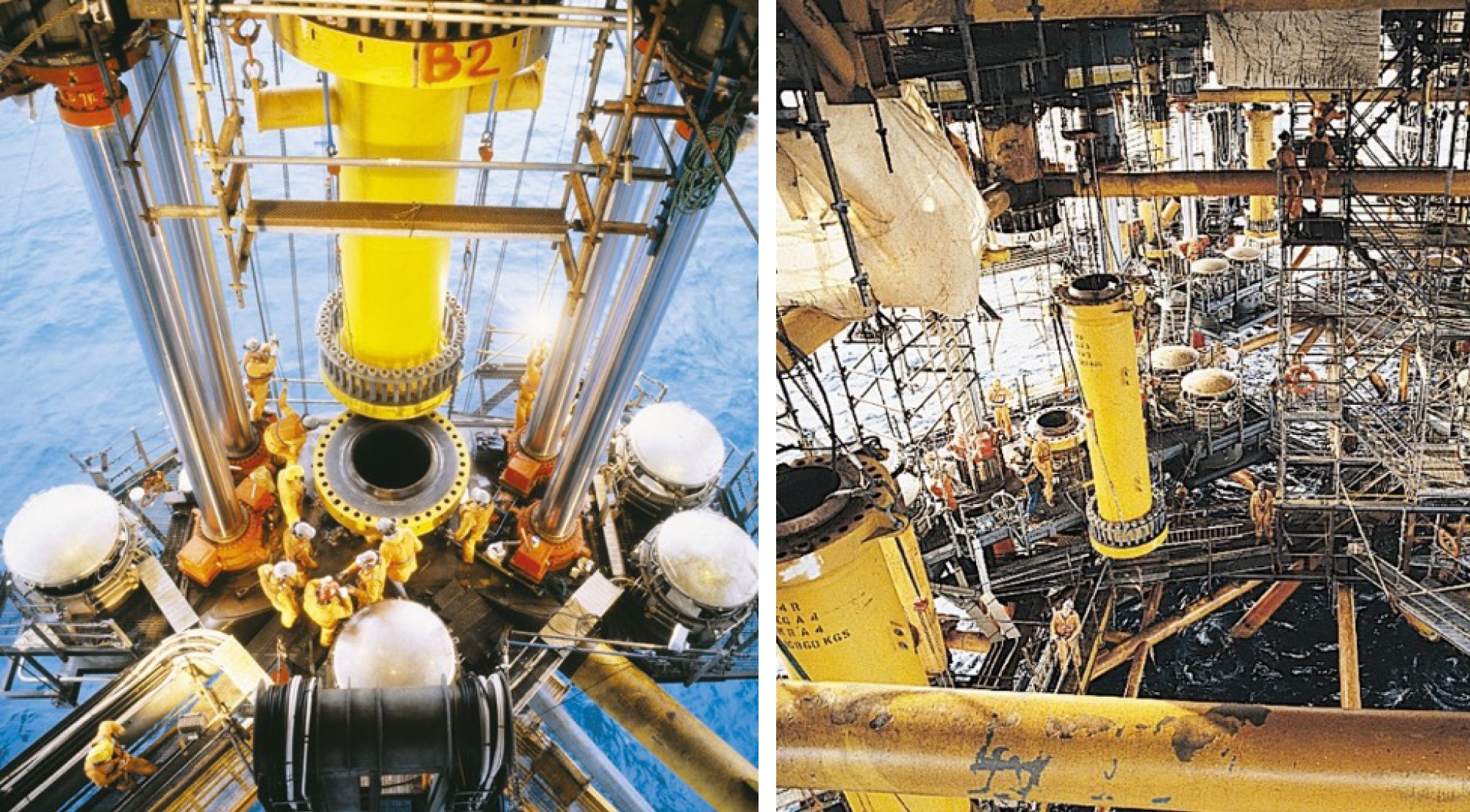 The Ekofisk 2/4 W bridge support on the southern flare stack is turned into a water injection unit.

New carbon tax  The introduction of a Norwegian carbon tax prompts the oil industry to take a number of steps to reduce greenhouse gas emissions from the NCS. Norway had always imposed strict environmental regulations on petroleum production and transport. The carbon tax reinforces the attention paid by the industry to environmental practices and strengthened Norway’s position as one of the world’s cleanest petroleum producers.

The Embla field starts production through a tie-in to Ekofisk via the Eldfisk Complex.

ConocoPhillips is established with headquarters in Houston and a European and Norwegian head office in Tananger, Norway. The first center for integrated operations — a drilling center on land — opens in Tananger.

The Ekofisk 2/4 M wellhead and process platform is installed as part of the Ekofisk Area growth project.

Decommissioned facilities and tank topsides are removed at Edda and Ekofisk 2/4 T (tank).

The integrated energy company splits its activity into two independent companies, the upstream ConocoPhillips and the downstream Phillips 66.

The Eldfisk II development project is completed with the opening of the integrated platform Eldfisk 2/7 S at the Eldfisk Complex. The Tor 2/4 E platform ceases production.

The Ekofisk 2/4 VC subsea water injection installation is in operation.

The popular Norwegian television series Lykkeland (State of Happiness in English) reflects the impact Ekofisk has had on the country. Before it came into being, the producer and writer were looking for a historical event that was pivotal in creating modern Norway. They chose Ekofisk. For a younger generation of Norwegians, the series has been an eye-opener.

The eight-part drama, which won Best Screenplay at Cannes Series Festival and has been purchased by the BBC, is set in the summer of 1969 in the small Norwegian coastal town of Stavanger. International oil companies have been drilling for years, but nothing commercial has been found. Phillips Petroleum, however, is contracted to drill a final hole — and on Christmas Eve 1969 the gas flare at the oil rig Ocean Viking is lit. The Ekofisk field has been discovered, and everything is about to change.

“The story is about the oil that came to Norway,” said series writer Mette Bølstad. “In a way, it’s about the beginning of modern society.”

Communication & Government Affairs Manager Stig Kvendseth, along with other ConocoPhillips employees, consulted on the television project. “It’s a good visual picture of Norway in 1969,” Kvendseth said. “The series visualizes in a dramatic way how Stavanger changed as a result. When Americans came, they brought new traditions.”

Safety and Sustainability at Ekofisk: 50 years and still learning