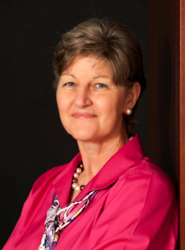 Ellen DeSanctis is senior vice president, Corporate Relations. She has more than 40 years of experience in technical, strategic and communications leadership within the oil and natural gas industry.

She provides overall guidance for ConocoPhillips’ investor relations, communications, human resources, brand, charitable investments, corporate events and real estate and facilities services functions in support of the company’s mission, vision, values and strategic objectives. DeSanctis and her group serve as an interface with the investment community and the media, engage with internal and external stakeholders, support the development of a compelling culture and foster ConocoPhillips’ strong global reputation.

She began her career with Shell as a production engineer in 1978 and later worked in communications and financial roles for ARCO from 1987 to 1995, and for Vastar Resources from 1995 to 2000.

DeSanctis is a past president and board chair for the Girl Scouts of San Jacinto Council and remains an active member of the organization. She also currently serves on the board of directors of Saint Agnes Academy.

She earned a bachelor’s degree in geological and geophysical sciences from Princeton University in 1978 and a master’s degree in business administration from the University of California Los Angeles in 1987.