More Efficient Use of Steam in the Oil Sands

We continue to implement the use of flow control devices (FCDs) in the Canadian oil sands to improve our economic and environmental performance. The devices have contributed to a 50% production uplift early in well life and improved steam-to-oil ratio (SOR) by up to 10%. The lower steam to oil ratio means we’re producing more oil for the same amount of steam, lowering our GHG emissions per barrel of oil produced.

In Steam Assisted Gravity Drainage (SAGD) operations, FCDs may be employed in both the injector and producer wells. Using FCDs moves the steam across the reservoir to more efficiently heat the bitumen and improve how it flows into the well bore, especially in areas of complex geology. Increased use of FCDs has also reduced circulation time by 25%, which allows wells to start producing more quickly while decreasing our GHG emissions. FCDs also allow us to produce bitumen during the circulation period; we’ve seen about an 80% increase in production at conversion to SAGD from circulation, meaning that the wells are effectively paying for themselves before they officially begin production. 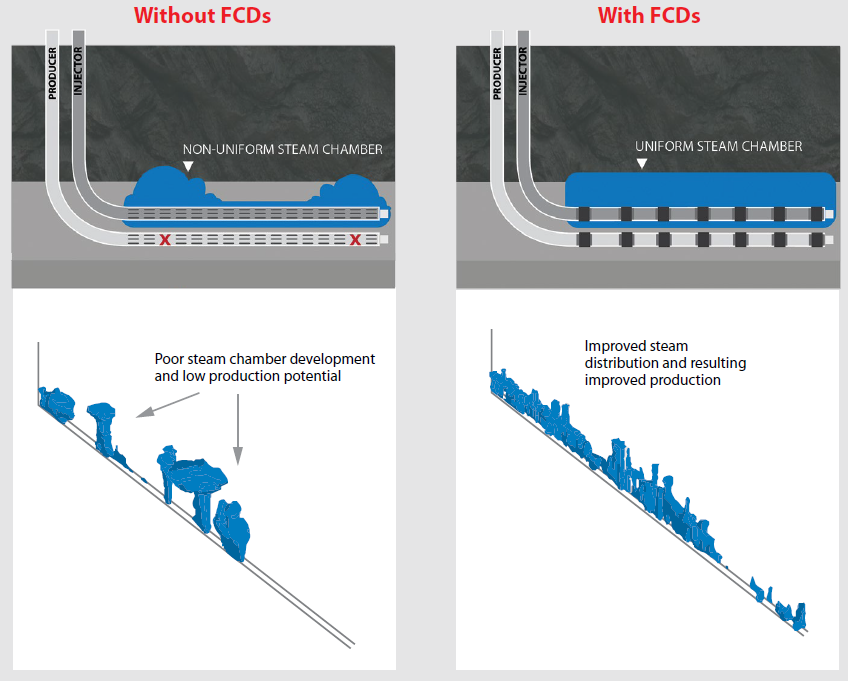 “Using less steam helps us protect the environment by reducing SOR and therefore greenhouse gas intensity levels. It’s good news on all fronts,” states Oil Sands Development and Subsurface Vice President Nick McKenna. We have been exploring FCDs for SAGD since 2006. A 2012 lab study in Alberta led to understanding the physics of FCDs such that we can now design FCDs specifically for SAGD. We lead the industry in both technology and laboratory testing and are seeing impressive performance results from FCD implementation.