In its 2018 World Energy Outlook, the International Energy Agency (IEA) illustrated a range of different energy mix scenarios in 2040. Total energy demand increases in IEA’s Current Policies and New Policies scenarios, but remains relatively stable compared to 2016 in the 2-degree Celsius Sustainable Development Scenario (SDS). Demand for natural gas and oil have different outcomes across the IEA scenarios. Oil demand grows relative to 2016 in the Current and New Policies scenarios but declines in SDS. In contrast, natural gas demand increases by year 2040 across all the IEA scenarios. 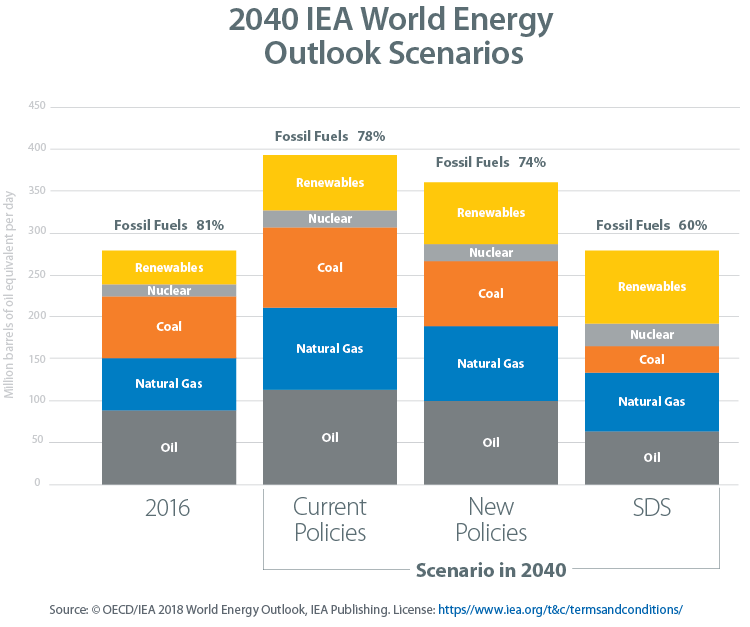 Changes in the energy system take time, as energy infrastructure components have long asset lives and change would have to go beyond replacing the power generation and distribution systems to include replacing the automobile, truck, ship and aircraft fleets or retrofitting them to meet tougher specifications. Increasing renewable power utilization would also require significant improvement in the daily reliability of wind- and solar-powered electricity generation, or a significant improvement in energy storage that would reduce the amount of backup fossil fuel-fired electricity generation needed.

These widely varying factors are the reason scenario planning is important. There is not just one pathway to a 2-degree future, there are numerous ways in which government action and technology development could interact with consumer behavior to bring about a lower-carbon future. Performance on climate-related risk is driven by the strength of strategic planning, including the use of widely varying scenarios, as well as the financial strength and asset flexibility to manage across a range of possibilities.