“I am proud of our organization for safely delivering exceptional results in 2018,” said Ryan Lance, chairman and chief executive officer. “Our accomplishments reflect our clear commitment to a value proposition that is focused on returns and free cash flow generation, and that balances investments with returning cash flow to shareholders through price cycles. This is our formula for offering investors a compelling way to invest in our sector. We look forward to delivering another strong year of performance in 2019.”

Preliminary 2018 year-end proved reserves are 5.3 billion barrels of oil equivalent (BOE). The total reserve replacement ratio, including a net increase of 0.2 billion BOE from closed acquisitions and dispositions (A&D), is expected to be 147 percent. Increased crude oil reserves accounted for over 90 percent of the total change in reserves.

Final information related to the company’s 2018 oil and gas reserves, as well as costs incurred, will be provided in ConocoPhillips’ Annual Report on Form 10-K, to be filed with the Securities and Exchange Commission in late February.

Production excluding Libya for the fourth quarter of 2018 was 1,313 MBOED, an increase of 94 MBOED compared with the same period a year ago. The volume impact from A&D was a net benefit of 5 MBOED. Excluding the A&D impact, underlying production grew more than 7 percent. The increase was primarily due to growth from the Big 3 unconventionals, development programs primarily in Europe and Alaska, and production from major project startups. These more than offset normal field decline. Production achieved the high end of guidance largely due to partner-operated production in Lower 48 and resumption of gas exports at the Kebabangan (KBB) Field in Malaysia. Production from Libya was 44 MBOED.

During the quarter, the company achieved first production from three major projects including GMT-1, Aasta Hansteen and Clair Ridge. Additionally, production continued to ramp-up at Bohai Phase 3 and the final development phase at Bayu-Undan was completed. In the Lower 48, production from the company’s high-margin Big 3 unconventionals grew to 335 MBOED. In Alaska, the exploration program resumed and includes testing of the Kuparuk Cairn prospect and appraisal of the Narwhal and Greater Willow areas. The Cairn and Narwhal wells utilize existing pads, minimizing the environmental footprint while testing new resources.

Earnings were higher compared with the fourth quarter of 2017 due to a gain from the sale of a partial interest in the United Kingdom Clair Field and higher realized prices and sales volumes, partially offset by the absence of U.S. tax reform adjustments in 2017 and unrealized losses on Cenovus Energy equity. Adjusted earnings improved compared with fourth-quarter 2017 primarily due to higher realized prices and higher production. The company’s total realized price was $53.00 per BOE, 15 percent higher compared with $46.10 per BOE in the fourth quarter of 2017, largely due to higher crude prices and a higher weighting of crude volumes in the portfolio.

For the quarter, cash provided by operating activities was $3.8 billion. Excluding a $0.6 billion change in operating working capital, ConocoPhillips generated $3.2 billion in CFO. CFO included approximately $0.3 billion from APLNG distributions and $0.1 billion from the PDVSA ICC settlement. In addition, the company generated $0.7 billion in disposition proceeds largely related to customary adjustments from the United Kingdom Clair Field and Alaska Greater Kuparuk Area transactions, as well as from the sale of Barnett and other non-core assets in Lower 48. The company also incurred $1.6 billion in capital expenditures and investments, $0.9 billion for share repurchases and $0.4 billion for dividends.

Production excluding Libya for 2018 was 1,242 MBOED, 114 MBOED lower as compared with 1,356 MBOED for 2017. The volume from closed dispositions was approximately 200 MBOED in 2017 and 15 MBOED in 2018. The volume from acquisitions was less than 10 MBOED in 2018. Excluding these impacts, underlying production increased over 5 percent. The increase was primarily due to growth from the Big 3 unconventionals, development programs in Europe and Alaska, and ramp-up of major projects in Asia Pacific. These more than offset normal field decline. Production from Libya was 41 MBOED.

The company’s total realized price during 2018 was $53.88 per BOE, 37 percent higher compared with $39.19 per BOE in 2017. The improvement reflects stronger marker prices, as well as a shift in the portfolio toward a higher mix of crude oil and less of bitumen and natural gas.

In 2018, cash provided by operating activities was $12.9 billion. Excluding a $0.6 billion change in operating working capital, ConocoPhillips generated $12.3 billion in CFO. This exceeded $6.75 billion in capital expenditures and investments, $3.0 billion of repurchased shares and $1.36 billion of dividends by $1.2 billion. Capital expenditures and investments included approximately $0.6 billion for acquisitions, most notably the Alaska Western North Slope bolt-on acquisition for $0.4 billion and acquisition of additional acreage in the Montney in Canada for $0.1 billion. In addition, the company paid $5.0 billion to reduce debt, sold $1.6 billion of short-term investments and generated $1.1 billion from asset dispositions. ConocoPhillips ended the year with cash, cash equivalents and restricted cash totaling $6.2 billion and short-term investments of $0.2 billion, equating to $6.4 billion of ending cash and short-term investments.

The company’s 2019 guidance for capital expenditures is $6.1 billion. First-quarter 2019 production is expected to be 1,290 to 1,330 MBOED, reflecting the impacts of a planned turnaround in Qatar of approximately 15 MBOED and government-mandated production curtailment in Canada of approximately 10 MBOED. Production is expected to ramp-up in the second half of the year, with full-year 2019 production guidance unchanged from the previously communicated 1,300 to 1,350 MBOED. Production guidance for 2019 excludes Libya.

ConocoPhillips is the world’s largest independent E&P company based on production and proved reserves. Headquartered in Houston, Texas, ConocoPhillips had operations and activities in 16 countries, $70 billion of total assets, and approximately 10,800 employees as of Dec. 31, 2018. Production excluding Libya averaged 1,242 MBOED in 2018, and preliminary proved reserves were 5.3 billion BOE as of Dec. 31, 2018. For more information, go to www.conocophillips.com

This news release contains forward-looking statements. Forward-looking statements relate to future events and anticipated results of operations, business strategies, and other aspects of our operations or operating results. In many cases you can identify forward-looking statements by terminology such as "anticipate," "estimate," "believe," "continue," "could," "intend," "may," "plan," "potential," "predict," "should," "will," "expect," "objective," "projection," "forecast," "goal," "guidance," "outlook," "effort," “on track,” "target" and other similar words. However, the absence of these words does not mean that the statements are not forward-looking. Where, in any forward-looking statement, the company expresses an expectation or belief as to future results, such expectation or belief is expressed in good faith and believed to have a reasonable basis. However, there can be no assurance that such expectation or belief will result or be achieved. The actual results of operations can and will be affected by a variety of risks and other matters including, but not limited to changes in commodity prices; changes in expected levels of oil and gas reserves or production; operating hazards, drilling risks, unsuccessful exploratory activities; difficulties in developing new products and manufacturing processes; unexpected cost increases or technical difficulties in constructing, maintaining, or modifying company facilities; international monetary conditions and exchange rate fluctuations; changes in international trade relationships, including the imposition of trade restrictions or tariffs relating to crude oil, bitumen, natural gas, LNG, natural gas liquids and any materials or products (such as aluminum and steel) used in the operation of our business; our ability to collect payments when due under our settlement agreement with PDVSA; our ability to liquidate the common stock issued to us by Cenovus Energy Inc. at prices we deem acceptable, or at all; our ability to complete our announced dispositions or acquisitions on the timeline currently anticipated, if at all; the possibility that regulatory approvals for our announced dispositions or acquisitions will not be received on a timely basis, if at all, or that such approvals may require modification to the terms of our announced dispositions, acquisitions, or our remaining business; business disruptions during or following our announced dispositions or acquisitions, including the diversion of management time and attention; the ability to deploy net proceeds from our announced dispositions in the manner and timeframe we currently anticipate, if at all;potential liability for remedial actions under existing or future environmental regulations; potential liability resulting from pending or future litigation; limited access to capital or significantly higher cost of capital related to illiquidity or uncertainty in the domestic or international financial markets; and general domestic and international economic and political conditions; as well as changes in tax, environmental and other laws applicable to our business. Other factors that could cause actual results to differ materially from those described in the forward-looking statements include other economic, business, competitive and/or regulatory factors affecting our business generally as set forth in our filings with the Securities and Exchange Commission (SEC). Unless legally required, ConocoPhillips undertakes no obligation to update publicly any forward-looking statements, whether as a result of new information, future events or otherwise.

Use of Non-GAAP Financial Information–To supplement the presentation of the company’s financial results prepared in accordance with U.S. generally accepted accounting principles (GAAP), this news release and the accompanying supplemental financial information contain certain financial measures that are not prepared in accordance with GAAP, including adjusted earnings (calculated on a consolidated and on a segment-level basis), adjusted earnings per share, cash from operations (CFO), free cash flow, return on capital employed (ROCE), adjusted operating costs, adjusted corporate segment net expense and dry hole and leasehold impairment expense. Operating costs is defined by the Company as the sum of production and operating expenses, selling, general and administrative expenses, exploration general and administrative expenses, geological and geophysical, lease rentals and other exploration expenses. Adjusted operating costs is defined as the Company’s operating costs further adjusted to exclude expenses that do not directly relate to the Company’s core business operations and are included as adjustments to arrive at adjusted earnings to the extent those adjustments impact operating costs. Adjusted corporate segment net expense is defined as corporate and other segment earnings adjusted for special items. Dry hole and leasehold impairment expense are components of and reported within exploration expenses.

The Company believes that the non-GAAP measures adjusted earnings (both on an aggregate and a per share basis), operating costs, adjusted operating costs and adjusted corporate segment net expense, are useful to investors to help facilitate comparisons of the Company’s operating performance and controllable costs associated with the Company’s core business operations across periods on a consistent basis and with the performance and cost structures of peer companies. The Company further believes that the non-GAAP measure adjusted operating costs provides a more indicative measure of the Company’s underlying, controllable costs of operations by excluding other items that do not directly relate to the Company’s core business operations. The company further believes that the non-GAAP measure CFO is useful to investors to help understand changes in cash provided by operating activities excluding the impact of working capital changes across periods on a consistent basis and with the performance of peer companies. The company also believes that free cash flow is useful to investors as it provides a measure to compare CFO after deduction of capital expenditures and investments across periods on a consistent basis. The company believes that ROCE is a good indicator of long-term company and management performance. ROCE is a measure of the profitability of ConocoPhillips' capital employed in its business. ConocoPhillips calculates ROCE as a ratio, the numerator of which is net income adjusted for special non-reoccurring items, plus after-tax interest expense, and the denominator of which is average total equity plus total debt. The Company believes that the above-mentioned non-GAAP measures, when viewed in combination with the Company’s results prepared in accordance with GAAP, provides a more complete understanding of the factors and trends affecting the Company’s business and performance. The company’s Board of Directors and management also use these non-GAAP measures to analyze the company’s operating performance across periods when overseeing and managing the company’s business. 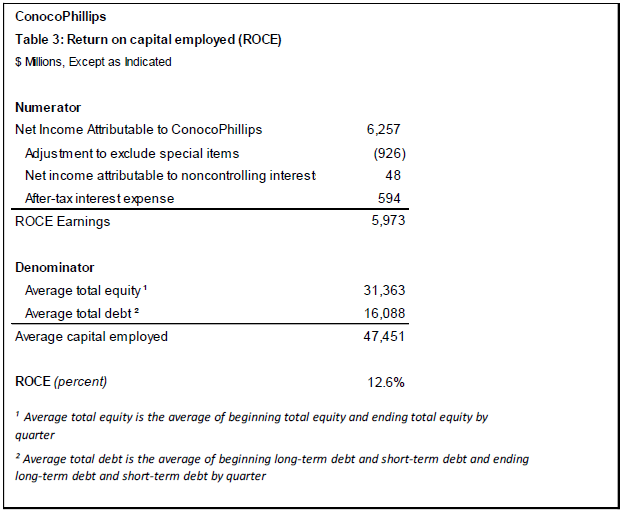 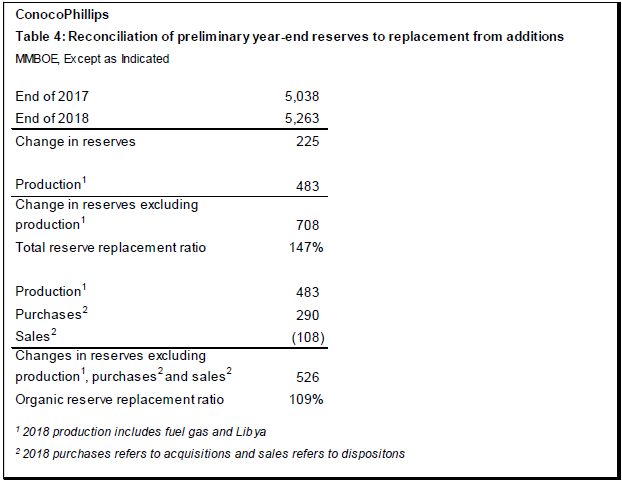 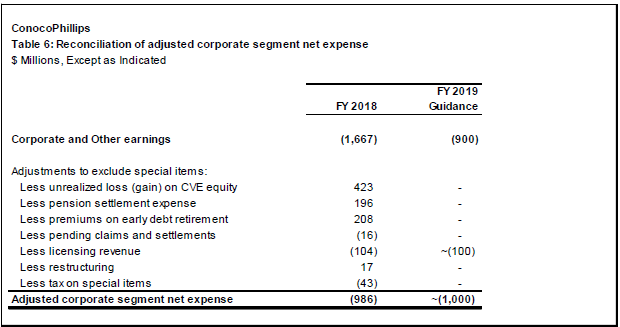